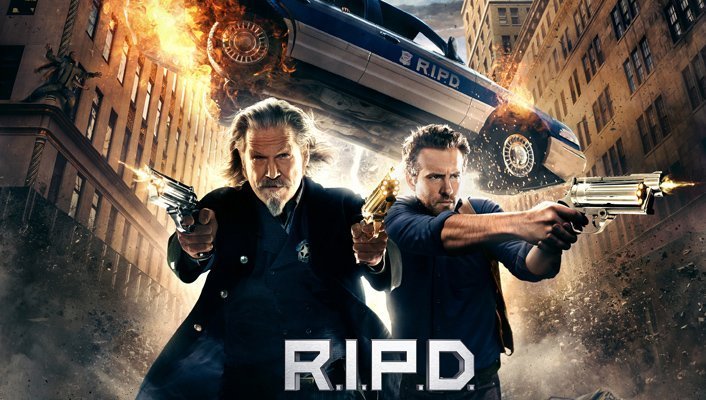 At first glance, R.I.P.D. looks like a redressed version of Men in Black, only this film takes the MIB alien formula and puts an undead spin on it. Instead of men in suits with dark glasses, you have the Rest In Peace Department. Who needs aliens when you have lost souls referred to as “Deados?” There’s a promising concept here that may have worked if director Robert Schwentke had not ventured too far into the kiddie pool.

After dying in the line of service, Nick (Ryan Reynolds) is given a second chance at making it through the Pearly Gates by joining an undead police force. He’s partnered with veteran officer Roy (Jeff Bridges) to track down a person that has eluded the ultimate judgement. The longer these lost souls stay on earth past their prime, the more their soul rots. This in turn has an impact on the world around them. Dead plants, lights flickering, the elevator doesn’t quite work right? Someone probably lives in that building that shouldn’t be there. And by “there,” I mean “Earth.” This rot is so bad it even contributes to spotty cell phone reception and global warming.

At the start this movie had opportunities to be a lot of fun. Deados look like everyone else, but they turn into their true form when confronted with Indian food (for whatever reason). This first Deado had a large mouth, because apparently he was a snitch in his previous life. A pretty neat concept that unfortunately is not really played upon for the rest of the film. Then the chase scenes start happening, which include fart noises as overly fat ghouls run through the streets to escape pursuit.

As fun as the Deado idea sounded up front, it quickly diminishes the longer they are on the screen. Aside from the bowel movements, they have kind of a dopey way of speaking, “Let’s get him! Awww maaaan, my gun just jammed!” that seems like it belonged in an animated film for children. That, in turn, leads to the problem of this movie not knowing which audience to play to. I started to feel that while I may not fully enjoy it as much as I wanted to, maybe kids will like it. That is until Deados, intent to show their true form, sniff a handful of Indian spices like they were doing coke at Studio 54.

The monsters are not the only ones with a clever disguise. Obviously these officers of the underworld cannot go gallivanting about town, so to the average person they look like normal people. Bridges is seen through mortal eyes as a beautiful bombshell who gets cat calls throughout the movie. Just the disguise you’d want when trying to keep a low profile, right? Reynolds is perceived to everyone else as an elderly Chinese man who, when pulling out his gun, is holding a banana. Hey, what’s going on over there? Oh, just a hot blonde and an old man hanging out holding produce, like they do.

The only real saving factor was Bridges, as the old lawman that has been on the force since the 1800s. Reynolds is charming and charismatic as usual but practically everything that comes out of Bridges’ mouth is gold. He’s basically channeling Rooster Cogburn with a lighter tone. The fact that he is old in a modern world seems ripe for standard hokey fish out of water jokes, however this film is actually successful at it. Schwentke definitely keeps it PG-13 by only using one curse word, which they liberally sprinkle throughout the entire 96 minutes. It does become noticeable after a while – not because it’s offensive, but because you start thinking “Expand your damn vocabulary!”

After all is said and done, the dialogue delivered by Bridges will be just as funny on television as it is on the big screen. As an added bonus, the lackluster CG effects may look even better on a TV instead of the theater! When it comes to R.I.P.D. do not resuscitate – jet it die on the table.