[REVIEW] “Rise of the Planet of the Apes” reboots franchise with solid script and amazing performances. 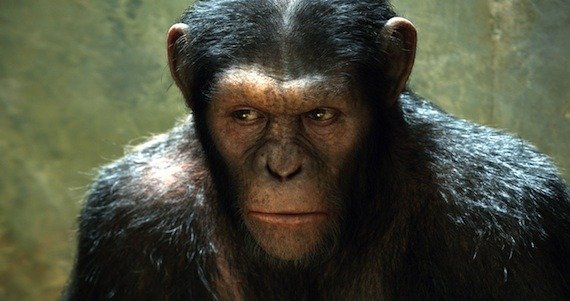 I remember seeing the Tim Burton remake of Planet of the Apes about ten years ago, and after seriously considering writing an angry letter to the studio and demanding they refund the cost of my ticket, I decided to cut my losses and move on, hoping that studio execs would see the error of their ways and leave the franchise alone.  So earlier this year, when I saw the first (terribly underwhelming) trailer for Rise of the Planet of Apes, I shook my head in sorrow, wondering how badly Hollywood would screw it up.

Then came the revised trailer, which gave a much clearer indication of the story’s trajectory, as well as the overall tone of the film.  I decided that there might be a chance for the film to turn out alright.  I certainly didn’t expect a masterpiece, but I was no longer ready to write it off as a train wreck like Burton’s attempt.  I caught Rise early this morning, and walked out of the theater convinced that it is easily among the best films of the summer movie season.

James Franco is effective as Will Rodman, a scientist working for a large pharmaceutical corporation to develop a cure for Alzheimer’s disease (Will has a particularly personal connection to finding success, which I won’t give away).  Testing of ALZ-112 on chimpanzees not only begins to produce positive results, but an unexpected side effect: in the absence of disease, the brain cells of the test subjects are repairing and regenerating themselves, resulting in accelerated intelligence.  Before Will can begin human trials, an unfortunate incident bred from a misunderstanding leads to the termination of the project, as well as the test subjects themselves, save for an infant chimp named Ceasar that Will manages to smuggle out of the lab.

When Will discovers that the effects of the drug have been passed on to Ceasar by his mother, he decides to raise the chimp himself in order to monitor his progress.  As Ceasar grows older, his intelligence increases at an almost exponential rate, and he learns to communicate via sign language.  He understands human speech and is capable of experiencing a wide range of human emotions, but still struggles from time to time with his primal nature.  One such struggle results in Ceasar being taken from Will and placed into a primate sanctuary, where he is subjected to the cruelty of the owner’s son (Tom Felton, playing a character even more despicable than Draco Malfoy), as well as the mistrust and misunderstanding of his own kind.

As Ceasar devises a plan to use his intellect as a means of establishing himself amongst his species, the data Will has collected over the past few years leads to the ALZ-112 project being reopened.  However, as testing on primates resumes, Will struggles with his own personal feelings and ethics, and ultimately must make a difficult choice about his own future, leading to a tense, emotional third act.

First things first: the visuals, brought to life by the team at WETA Digital.  What they have managed to achieve here is unprecedented, and there is no amount of praise I could begin to heap upon this talented team that would ever be anything close to what they deserve.  They breathe more life and humanity into the computer generated primates in Rise than the human actors manage to convey with their own performances (more on that in a moment).  WETA’s work on the Lord of the Rings trilogy and Avatar have continued to advance the field of visual effects, but this will surely raise the bar into the stratosphere.

But WETA could not have made such believable characters without the help of an amazing assembly of motion-capture actors, particularly Andy Serkis.  With an award-worthy portrayal of Ceasar, Serkis delivers a performance that runs the gauntlet of nearly every human emotion, and by the end of the film we are so completely invested in Ceasar that we have long since forgotten that he doesn’t truly exist.  The same can be said of Maurice, Koda, Rocket, Buck, and the rest of the digitally-created primates – they each have distinctive personalities and characteristics, and the audience feels a connection to each of them.

Unfortunately, with the the notable exceptions of James Franco and John Lithgow, the rest of the human cast are criminally under-utilized, completely overshadowed by their digital costars and becoming little more than basic archetypes who serve no purpose other than to appear in a scene and advance the plot when necessary.  But in a movie that gets so many other things right, this turns out to be a very small gripe.

Rupert Wyatt’s direction, as well as the decision of the screenwriters to cast the primates as the empathetic characters, results in a film that is enjoyable from start to finish.  Rise of the Planet of the Apes feels at once familiar and original, and by the time the credits roll, the stage has been set to fully re-create the Planet of the Apes universe (via a few well-placed Easter eggs for fans).  If the inevitable sequel can maintain the same level of quality and entertainment that’s on display here, then count me in.