[REVIEW] Leggo My Eggo you damn…dirty…ape! 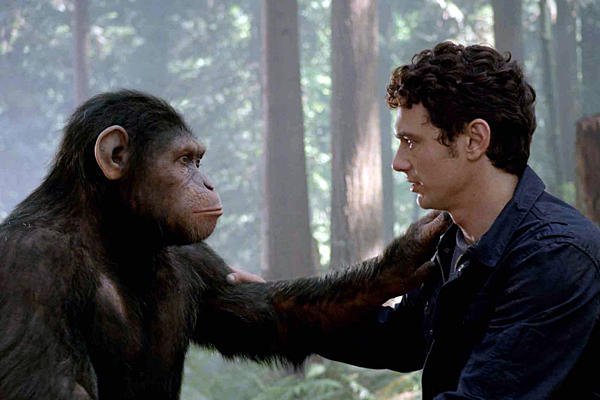 Here it is, ladies and gentlemen, my first official movie review for the site.  And I couldn’t have picked a better move to cut my teeth on than Rise of the Planet of the Apes.  Be warned, there are a few spoilers in here, but I promise not to ruin it for you.

I have a confession to make.  I have not seen any of the five original Apes movies, nor have I read the book.  But the franchise was so popular that, like most people, I was familiar with the basic premise, especially after being parodied in The Simpsons, Futurama, and Spaceballs.  However, even that basic framework turned out to be unnecessary, as Rise of the Planet of the Apes comes across like a complete relaunch of the franchise – but unlike the Tim Burton attempt, this version actually seems to know what it’s doing.  Sorry Tim, but what was going on with that crapfest you put out a decade ago?  Did you lose a bet with someone?

The movie opens with James Franco’s character, Will Rodman, working for a pharmaceutical company trying to develop a cure for Alzheimer’s disease.  He develops a serum, ALZ-112, which they have begun testing on primates.  One chimp in particular, Bright Eyes, shows remarkable results, and success paves the way for the the drug to move onto human testing… until Bright Eyes goes on a rampage throughout the lab, causing the research to be halted, as well as immediate termination of the “infected” apes.  Only after Bright Eyes is put down does Will discover that she has recently given birth, and he finds himself unable to carry out the same sentence for the infant, opting instead to take the little one home to be cared for.  Will’s father (John Lithgow) christens the chimp “Ceasar,” and along with Will’s love interest (Freida Pinto) they develop into a family, with Caesar as the central bond.

I do not wish to give any more of the plot away, as I hope all of you will go see the movie for yourself.  So, with that in mind I will leave the story and move on.

Of all its impressive aspects, the most fascinating part of this film is the amazing (as always) performance of Andy Serkis.  Most of you will remember him as the man who brought Gollum to life in the Lord of the Rings trilogy, as well as the title character in Peter Jackson’s King Kong.  His ability to take what we see in our imaginations and turn it into something fully realized… it’s unreal. There were countless moments throughout Rise where I could not believe that Caesar was nothing more than a man in a motion capture suit.  Serkis is the true definition of “living a role,” and his performance skills are unmatched.

When I first heard about the project and started seeing trailers for it, I was less than excited.  But now, I feel like a fool for not getting on board much sooner.  With an amazing story, great acting, and stunning visual effects, it has earned its way into my top movies of the summer, as well as one of the best prequel/remakes I have ever had the privilege to watch.  And yes – Charlton Heston’s iconic line does make its way into the film.

For a more in-depth look at Rise of the Planet of the Apes, hop over and read Brent’s review.  And then stop reading and go see the film for yourself.

[REVIEW] “Rise of the Planet of the Apes” reboots franchise with solid script and amazing performances.