REVIEW – ‘Snow White and the Huntsman’ 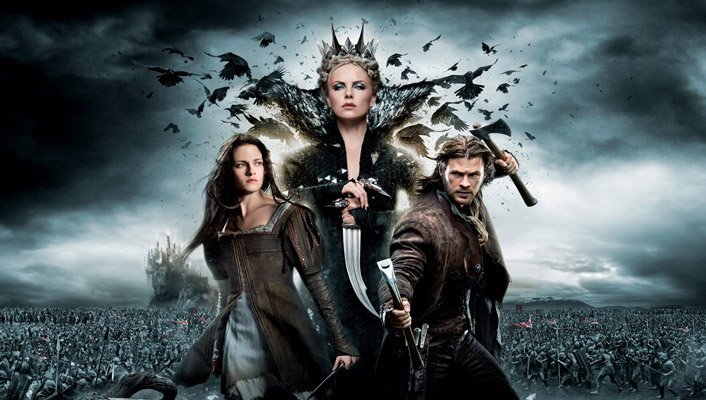 Snow White and the Huntsman is the second film this year that looks to reimagine the classic fairy tale for a new audience. While Tarsem Singh may have chosen the family-friendly route with the enjoyable Mirror Mirror, director Rupert Sanders is aiming for a decidedly adult audience with his feature film debut, shaping the legend into a superbly dark new vision.

After using her powers to seduce a widowed king and murdering him on their wedding night, powerful sorceress Ravenna (Charlize Theron) begins a reign of tyranny that drives the kingdom into ruin. She maintains her youthful appearance by siphoning the souls of beautiful maidens from across the kingdom, but learns that her power will continue to fade unless she consumes the heart of the king’s only daughter, Snow White (Kristen Stewart), who has been imprisoned in the castle since her father’s death.

Using the lecherous nature of the Queen’s brother (Sam Spruell) to her advantage, Snow White escapes from her cell and flees the castle grounds to take refuge in the Dark Forest. When Ravenna’s soldiers refuse to continue the search, she enlists the help of a local huntsman (Chris Hemsworth) to track down the girl, promising to reanimate the Huntsman’s recently deceased wife in exchange for Snow White’s safe return. Realizing what the Queen has in store for the princess, the Huntsman helps her escape further into the forest, where they join forces with a band of dwarves and the local nobleman (Sam Claflin) to begin plotting a rebellion.

The screenplay does an excellent job of using the original tale’s basic framework as the starting point for a much more ambitious adventure. All of the familiar elements are present, including the magic mirror and the poisoned apple, but each one has been altered to ensure that the experience feels fresh and exciting. There are a few misfires, including an absurd amount of exposition in the first act and a cliché-ridden speech by Stewart as she attempts to inspire her army of rebels, but the good far outweighs the bad.

Speaking of Stewart, audiences that may have been turned off by her bland and lifeless performance in the Twilight franchise should be relieved to hear that she’s firing on all cylinders here, no doubt being forced to elevate her game thanks to a brilliant performance from Theron as the exquisitely wicked Queen Ravenna. Beautiful and deadly, Theron saunters from scene to scene dripping evil from every pore, reveling in her own cruelty and turning in some of the best work of her career.

Sanders is an experienced music video director, and the combination of his unique vision along with gorgeous costumes from Oscar-winning designer Colleen Atwood turns Snow White and the Huntsman into one of the most visually stunning films to grace the screen this year. This is The Dark Knight of fairy tale movies, a bleak and cheerless tale of cruelty and vengeance, and a brilliant new rendition of a timeless classic.