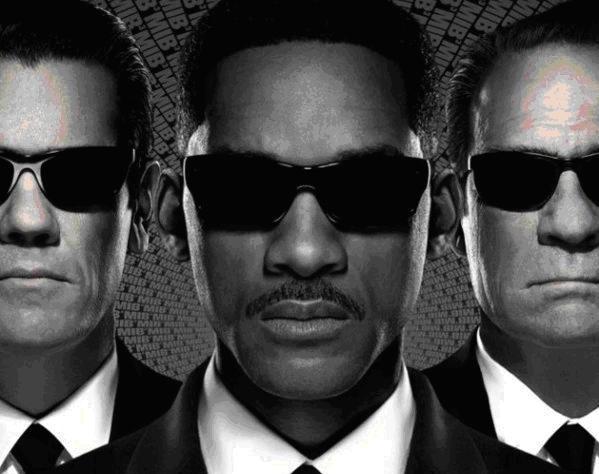 On the surface, Men in Black III  appears to be another franchise resurrected from the dead to provide a sequel nobody was really demanding. Throw in the rumors of massive script re-writes and trouble on the set, and it seemed fairly certain MIB3 was setting itself up to be a horrendous mistake even worse than the travesty that was MIB2. But somehow through all the adversity a surprise treat of a movie managed to work its way to the surface, resulting in an unexpectedly sweet and fun MIB3 that should satisfy most summer movie fans.

The plot of MIB3 is easily summarized in even the shortest advertising for the film: Agent J (Will Smith) has to travel back in time to rescue his partner Agent K (Tommy Lee Jones) and save the world in the process. As simple as it sounds, the idea to go back to 1969 was actually quite brilliant, allowing this film to really stand out in the series. With the continued popularity of Mad Men and the critical acclaim garnered by X-Men: First Class, the film takes advantage of that particular era’s appeal and moves the franchise in a new fresh direction.

More importantly (for this site’s demographic) the retro sci-fi designs of the 60’s, including classic bubble helmets, clunky ray guns and little green men, are geek heaven for fans of the genre. I can see multiple slow-motion Blu-Ray viewings of the of the 60’s MIB headquarters in my near future. Heh, get it? Future. Time humor! Ahem…

As you might expect if you watched any of the trailers, the thing that really makes this film work is Josh Brolin as young Agent K. His appearance, demeanor, cadence and overall performance are so beautifully accurate you forget that Tommy Lee Jones, while great in his limited screen time, is hardly in the movie. A much-deserved tip of my hat to Brolin for refusing to take the easy way out and just do an impression of Jones, opting instead to create a younger, happier, more optimistic Agent K. It’s not a carbon copy, yet it immediately feels right and in line with the character. I would watch a spinoff movie with young Agent K set in the 60’s or 70’s in a heartbeat.

Ultimately what sets MIB3 apart from the previous films is the focus on the relationship between J and K (both young and old) portrayed with excellence by all three leads, and it caught me off guard with its emotional resonance. The supporting cast are all great performers that bring as much as they can to pretty empty thankless roles. Jermaine Clement (Flight of the Conchords) plays the heavy in the film, a nasty biker alien named Boris The Animal that has a history with Agent K. Clement is not given a very fleshed out baddie but actually seems born to play a super-villain with the deep bass in his voice and that great accent bringing a fun menace to the role.

Agent K has a love interest in Agent O, played in the current time by the adorable Emma Thompson, and in 1969 by the equally adorable Alice Eve. Unfortunately, the ladies were nothing more than ideas to advance Agent K’s character growth, as opposed to fully realized characters. Most welcome was the introduction of a fascinating and endearing alien named Griffin (Michael Stuhlbarg) that can see all possible futures and helps guide J on his journey, and is probably the most instantly charming side character introduced in the franchise yet.

The main negatives in the film revolves around the obvious script issues and some of the familiar downfalls that have plagued the franchise. While Will Smith nailed the more powerful moments, the humor for his character in the film was just off – he still delivered his dialogue with gusto, but something was definitely missing, leading to more than a few moments where jokes fell flat and Smith appeared to be floundering. The CG, while much better in MIB3, is still not up to par, which is an issue that has plagued the franchise from the beginning. With the film’s budget and the advancements in technology, this should be a non-issue, but there are plenty of bad green-screen set pieces that are entirely too obvious. Luckily, seeing the film in 3D should mask some of the visual disappointment.

If the Men in Black franchise had faded into pop-culture history, I can’t say I would’ve minded all that much, and I certainly wasn’t highly anticipating the potential franchise revival. But part of the fun of getting to review films is getting proved wrong and allowing expectations to be exceeded. Men in Black 3 is a pleasant surprise that is sleek, never slows down and has enough cleverness and heart to make the film a little bit more than your mindless summer special-effects tentpole movie, and really, that’s all you can ask of it.