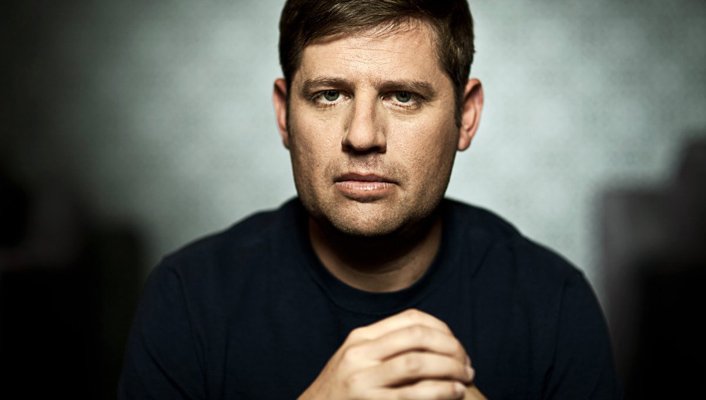 Paranormal Activity director Oren Peli is in a cozy suite at the Ritz Carlton in downtown Phoenix, talking animatedly about his latest project, Chernobyl Diaries. The film follows a group of “extreme tourists” as they sneak into the abandoned city of Pripyat, which was left decimated by extreme levels of radiation after the 1986 nuclear accident in Chernobyl. Peli has just begun to detail the inspiration for the film when he’s distracted by a can of soda placed in front of him.

“Hey, you scored Coke!” he exclaims excitedly. I suggest that this particular phrase might elicit some raised eyebrows from anyone listening to the recording without proper context, but Peli shrugs it off when a laugh. “I can’t get through my day if I don’t get enough Coke!”

Dressed casually in jeans and a black t-shirt, Peli’s easygoing demeanor seems out of character for a horror movie auteur, but as it turns out, he wasn’t always a fan. Peli says he was “traumatized” after watching The Exorcist when he was eleven years old, which completely turned him off to the genre.

“Because of that, I didn’t watch too many horror movies growing up. I was so traumatized by anything to do with hauntings and ghosts and demons, I refused to watch anything that dealt with the subject matter,” he recalls. “I’m not kidding – when Ghostbusters came out I was like, no thanks.”

Today, Peli has a string of successful horror films under his belt, and is always trying to find new ways to terrify his audience. As producer and co-writer on Chernobyl Diaries, he was fascinated by the concept of a city that was vacated almost overnight.

“It’s a desolate city which has the unique characteristics of people abandoning it without taking their belongings,” he says, referring to the Ukrainian town of Pripyat where the bulk of the film takes place. “On top of that, you have the factor of the radiation… there’s no other place like that on Earth. It just seemed very creepy and eerie, and it felt like this could be the perfect setting for a horror movie.”

“The kinds of things that scare me, they usually wouldn’t be a specific thing,” Peli elaborates. “If there was a monster over there I’d be like, Oh crap, it’s a monster, and I’d run the other way. In the case of Chernobyl Diaries, the whole idea that you’re stranded in an abandoned town, and there’s no one coming to help you. You think you’re alone, and then you hear a scream in the middle of the night coming from somewhere in the city… Is it human, is it inhuman? What does it want from me? That feeling of dealing with the unknown, being helpless and that loss of control, that’s the kind of thing that gets under my skin.”

The film began production in 2011 under the title The Diary of Lawson Oxford, and Peli breaks into a grin when this fact is brought up.

“You’re actually the first one to ask me about it,” he says with a laugh. “And it’s a great story. What we usually do, for most of the projects we have, we create fake names… We didn’t want anybody to know we were doing a movie about Chernobyl, so for a long time that was the name of the project, The Diary of Lawson Oxford. So here’s the reason.”

“On Facebook, some dude named Lawson Oxford friended me,” Peli continues, eyes gleaming with mischief. “He started with this whole thing about, he’s from the FBI, from the bureau in Dallas, and I’ve been a victim of fraud. It ended up being like, if I sent him like a hundred and twenty bucks for a processing fee, they’ll send me thirty thousand dollars in compensation or whatever. I could tell right away it was all B.S., so I decided to have fun with him. I would just keep arguing with him and telling him stories about my cat, Bobby.”

“I don’t have a cat,” he reveals, trying to hold back his laughter. “But I would send him pictures of cats I would find on the Internet and be like, Do you think my cat Bobby is really cute? And he’s like, Yeah, but did you send me the money? And I would keep giving excuses day after day for why I didn’t send the money, and I would send all those chat transcripts to my friend Brian… So then we said, we’ve gotta come up with a fake name, we’ve gotta give an homage to Lawson Oxford, who gave us so much entertainment, so it was called The Diary of Lawson Oxford.”

With Chernobyl Diaries opening last weekend, Peli has plenty of other projects on his plate, including Area 51, which will put him behind the camera again, and Lords of Salem, which he produced with writer/director Rob Zombie. He declines comment on the status of either film, claiming he should probably “keep his mouth shut,” but acknowledges that he’s interested in experimenting with other genres.

“Probably not a romantic comedy or a musical,” he admits. “But never say never.”