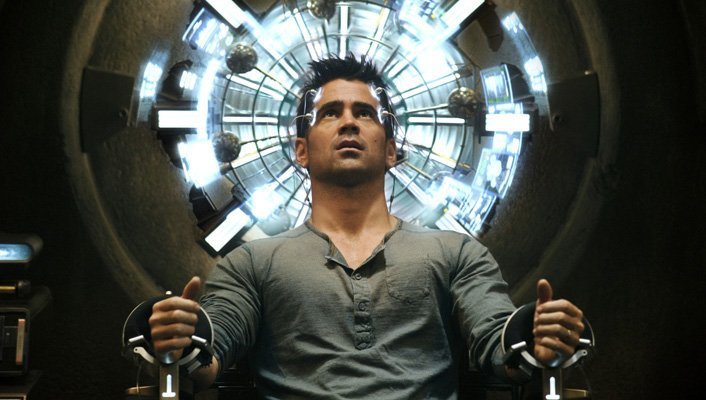 If there’s one thing Hollywood seems to love more and more with each passing year, it’s remakes. Unfortunately, these new versions featuring bigger budgets and current stars often pale in comparison to the classics that we know and love, but occasionally the studio will find a way to improve on the original formula in nearly every conceivable way.

Such is the case with Total Recall, an update of Paul Verhoeven’s 1990 sci-fi flick that sent Arnold Schwarzenegger to Mars in order to take down a corrupt and ruthless governor. The basic plot elements, about a factory worker named Quaid who visits a company that specializes in artificial memory implants and discovers that he may actually be a secret agent, will be familiar to anyone that’s seen the original, yet the filmmakers manage to make everything feel fresh, thanks to the beautiful and elaborate production design, as well as an earnest performance from Colin Farrell in the lead role.

The screenplay excises the trip to Mars completely, substituting a plot involving a wealthy nation and its continued suppression of the blue-collar workers that populate one of the planets last inhabitable colonies. Breaking Bad‘s Bryan Cranston chews scenery as the leader of the rich and powerful, and Kate Beckinsale plays his most trusted lieutenant, a double agent posing as Quaid’s wife that is far more lethal than anyone – or anything – in the film.

After making a name for himself with Live Free or Die Hard and the Underworld franchise, Len Wiseman brings the same high-octane, adrenaline-fueled action sequences to a futuristic setting. There are a number of iconic scenes from the original film that have been reimagined here, including Quaid’s memorable encounter with a lady of the night and his attempts to sneak through a security checkpoint, but everything feels more polished, more refined. Wiseman barely lets off the throttle during the nearly two-hour runtime, and the end result is a thrilling, exhilarating experience that is one of the year’s biggest surprises.