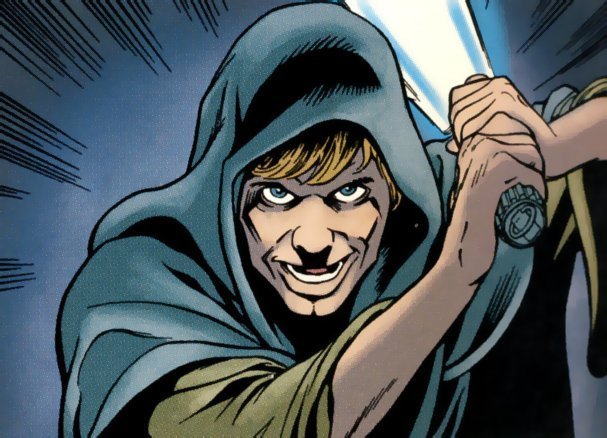 In which I use a lot of geeky references to say Happy Birthday to the greatest film experience in the history of mankind and then make fun of it.

For those not in the know, May 25th of this year was the 35th anniversary of the release of Star Wars to movie theaters nationwide. It is a day that means a great many things to fans of the Holy Trinity of films. Those of us who ran around in Boba Fett underwear swinging toy lightsabers well into middle school (alright, high school) know this date in the pits of our very souls. The movies bind us together in fandom, surrounding us. It doesn’t matter if you’re rich and live in the luxury of cities that would have easily been found on Alderaan (never forget), or if you’re a broke writer living in the wretched hive of scum and villainy that is Phoenix, you can’t throw a rock into a crowd without hitting a few Star Wars fans along its trajectory.  And so this is a love letter to Luke, to Leia, to Han, to Chewie, to Vader, and everyone else in between.

I still remember the first time I saw Star Wars, Episode IV: A New Hope. The copy I watched lacked the “A New Hope” moniker. My older cousins watched it during a Christmas gathering near Yardley, Pennsylvania and I popped in to see what was going on. I had to be no older than five or six years old, but I was immediately and completely enthralled by everything happening on screen. From that first blast of horns in the opening crawl to the group shot of the heroes in the end screen wipe to the credits, I was hooked, and even then I thought it was bullshit that Chewbacca didn’t get a medal. Everything was Star Wars from then on. My obsession with dinosaurs took a back seat to the mysticism of the Force and trying to build my own toy lightsabers. I wanted to be a Jedi Knight more than I wanted to be a Torosaurus. That was huge at the time. I saw the re-release of the original trilogy in theaters several years later and I don’t think a woman has ever made me feel that much joy. Sorry, but girls don’t have fuckin’ X-Wings and DL-44 blaster pistols. If I ever find one who does, I’ll marry her.

The prequel movies came out over the next decade and I loved every second of them, as god awful as they were. Ewan MacGregor’s portrayal of a young Alec Guinness still floors me, even if critics shred the new films to pieces. The fact that he’s the nephew of Denis Lawson, the guy who played Wedge Antilles in the Original Trilogy, is just icing on the proverbial cake.

Now we have the re..re…re…..re(?)- release of the entire run of movies in 3D to look forward to (or down on if you’re upset about it for some reason). I’ll be seeing the original trilogy in 3D when it comes out, that’s for sure. And you should too. For all of the issues people have with George Lucas, he gave us this universe. He created this entire living galaxy full of aliens and droids and space battles that has drawn us all together. I don’t think that the geek community would be the same without Star Wars, and for that we have Lucas and his vast team of incredibly imaginative filmmakers and actors to thank.

…which brings me now to the Extended Universe.

The movies are only a total of 12 hours of time. Huge fans of the films wanted more, and they got it. From Timothy Zahn’s Thrawn trilogy to the absolute worst dregs of horrid hack writing by Karen Traviss and others, the Extended Universe has given every fanatic a huge plethora of fluff to enjoy or be nauseated by.

For those who don’t know, there are multiple levels of Star Wars canon. LucasArts has released a guideline for people to understand how legitimate these things are. It starts at the top and goes down from there in legitimacy.

– G-Canon: George Lucas Canon. The six films and anything Lucas decides to actually say is real. Sometimes this backfires. See: Starkiller from The Force Unleashed.
– T-Canon: Television Canon. Right now, just the Clone Wars cartoon. Which actually has its decent moments, and you should probably check out if you enjoy the movies.
– C-Canon: Continuity Canon. The novels and video games and such that aren’t part of the above.
– N-Canon. Not Canon. Deleted scenes from movies, Robot Chicken sketches, comic books that are so irredeemably ridiculous that they have no bearing in Star Wars.

The problem with this is that he needs to just allow certain things and list them as “YES” on an excel spreadsheet somewhere. Otherwise you get things like:

He’s a genetic clone of the hero we all know taken from tissue samples of the hand he lost on Cloud City in Empire Strikes Back. I did not typo his name. The author saw fit to just add an extra U, rather than, I don’t know, renaming him.  I’m already immediately regretting the decision to do this article as I type this, I hope my brain can handle it all.

This little fella was part of a comic series that was N Canon. He had huge adventures and ended up being the droid in A New Hope that exploded so Uncle Ben purchased R2-D2. Because he knew how important it was that Luke ended up with R2. Because he could use the force. Swish that one around in your mouth for a bit.

In Queen of the Empire, Emperor Palpatine apparently spends a lot of time sleeping around and creates a son named Trioculus. Because he has 3 eyes. He gets killed by Robot Leia (what?!) with laser eyes (WHAT?!). This is so bad that I couldn’t possibly make it up. It’s like a 9 year old kid told his dad what he wanted to see in a book and he wrote it. Like an Axe Cop of 1993, but without the awesome.

Yeah. That’s uh. That’s a guy covered in lightsabers. The practicality of this is insane and he’d be killed pretty quickly. I have no idea why anyone thought this was a good idea. He also whisks children away in the night.

For every insane nonsensical thing permeating the Extended Universe, however, you at least have the memory of that original trilogy of films. I’m going to show them to my children some day, and hopefully their children, and pass the torch to the future generation. Thanks again, George. For the good, the bad, and the ugly. Without it, I wouldn’t be me.