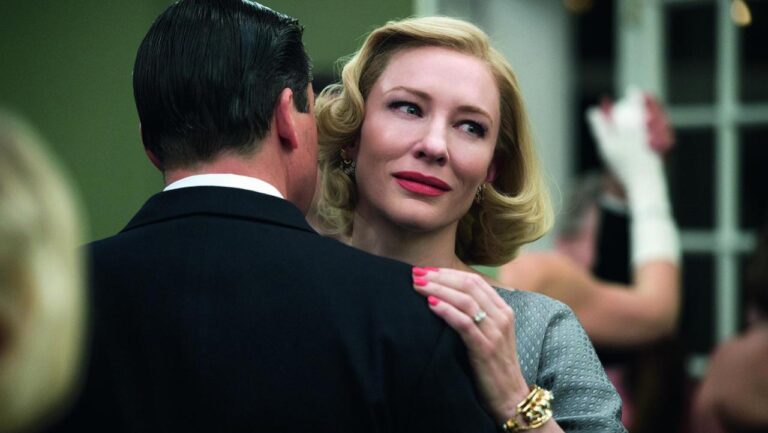 2015 has brought us so many great movies that celebrate feminism and homosexuality alike. Carol is no exception, telling a beautiful story of two women that fall in love. Todd Haynes’ film is based on The Price of Salt, a revolutionary 1952 novel that’s resurfaced in popularity over the past decade. Writing a romance centered on two lesbians isn’t as bold today as it was in the 50’s. Given how far filmmakers have recently come in depicting women and gays, though, now feels like the perfect time for Patricia Highsmith’s book to meet the big screen.

Rooney Mara gives one of her best performances as Therese, a store clerk trying to figure out what she wants out of life. Therese finds what she’s been looking for in an older woman named Carol (Cate Blanchett). From the second they meet in a toy department, the two share an instant connection. Although she doesn’t entirely understand these feelings at first, Therese is compelled to grow closer to this mysterious woman. Carol, who’s going through a difficult divorce, forms a powerful friendship with the lonely shopgirl that evolves into something much more.

Blanchett and Mara make for an enchanting match in one of the year’s most absorbing love stories. Carol is deprived of the sappy dialogue or overblown moments one would expect from a romance such as this. A fair deal of the movie simply consists of subtle, understated moments between these two individuals and that’s all the audience requires. We always know what’s going through their heads based on body language and eye contact. Sometimes a character can say so much more through a single facial expression as opposed to a grand speech, and Carol takes full advantage of the visual medium, showing two people making a connection.

Carol rings 100% true, avoiding any cheap shots or stereotypes. The film’s closest thing to a villain is Carol’s soon-to-be-ex-husband (Kyle Chandler), who threatens to take away his wife’s beloved daughter. Even he’s not totally a one-dimensional bad guy, though. We understand his frustration and can see why he would take extreme measures to gain custody of his child. Like everyone else in this movie, all he really wants is to be happy. He can’t find that happiness with Carol, however, as her heart belongs to Therese.

The film refreshingly takes its time planting the seeds of Carol and Therese’s relationship. The two don’t even kiss until about the halfway point. When they finally do come together, it’s a genuinely tender, sexy, and romantic moment. There isn’t a second between them that comes off as forced or unearned. The leads completely convince us that these ladies are meant for each other, faultlessly demonstrating what true love is.

Carried by enchanting performances from Cate Blanchett and Rooney Mara, Carol is a beautiful story of two women that fall in love.