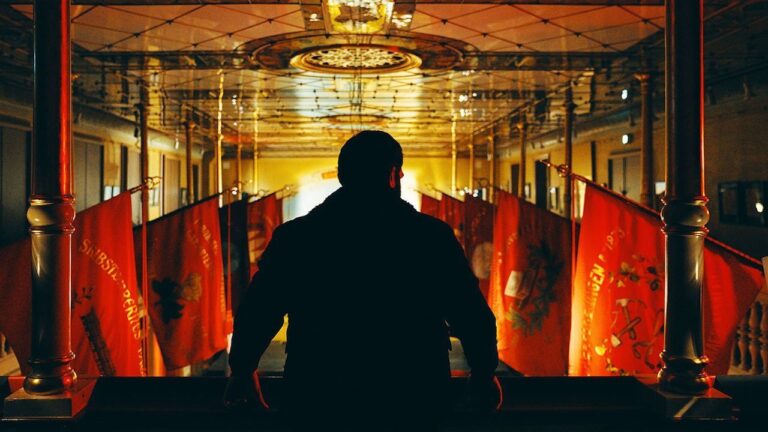 Four years after a subway bomb claimed the lives of 23 people in Copenhagen, right-wing extremism is not only on the rise, it’s quickly becoming mainstream thanks to a charismatic leader stoking the fires of nationalism. Can the actions of one person stem the tide of hatred that threatens to swallow the country whole? This is the premise for the gut-wrenching debut feature from Ulaa Salim, Sons of Denmark, screening at the 2019 Fantasia Film Festival.

19-year-old Zakaria (Mohammed Ismail Mohammed) watches with growing concern as Martin Nordahl (Rasmus Bjerg) rises to power on a platform of racism and demagoguery. “Our problems can be led back to the immigrants,” he tells a TV newscaster. “They need to go.” His incendiary rhetoric leads to a series of attacks on Muslim communities, with phrases like “go home” and “ethnic clean Denmark” smeared on walls and windows, and severed pig heads left in front of Muslim-owned businesses.

Fearful of being forced out of the country should Nordahl win the upcoming election, Zakaria is enlisted by neighborhood activist Hassan (Imad Abul-Foul), first to strike back at the right-wing terror cell Sons of Denmark by participating in an invasion of a secretive rally, then to carry out an assassination plot against Nordahl himself. Under the watchful gaze of the stoic Ali (Zaki Youssef), Zakaria prepares for the moment which will change his life forever, although not in the way he expects.

Salim’s film takes a surprising turn at the halfway mark, shifting its focus to a character who existed largely on the periphery during the first hour. It’s a bold decision that pays dividends, shedding new light on previous scenes and treating the audience to an altogether different perspective. Sons of Denmark also acknowledges the truth that violence begets violence, how difficult it can be to stop the cycle once it begins, and how easily idealism can manifest itself into such acts.

Although its depiction of racism in politics and the growing threat of white nationalism occurs in Denmark, Sons of Denmark should have no trouble resonating with US citizens who, just this weekend, watched the current President suggest that four members of Congress — all women of color — should “go back [to the] totally broken and crime infested” countries from which they came. That three of the Congresswomen in question were born in the US and the fourth has been nationalized appears to be of little consequence: these women aren’t white, so they’re clearly the enemy in the eyes of the President and his supporters.

These comments echo the sentiments expressed by Nordahl throughout Sons of Denmark, who also refuses to acknowledge his role in amplifying bigotry and emboldening militant groups across the country — again, elements that will be hauntingly familiar to US viewers. In many respects, the film serves as a cautionary tale — not of a dark future, but of a time that’s already upon us, which makes Salim’s debut feature all the more terrifying and affecting.