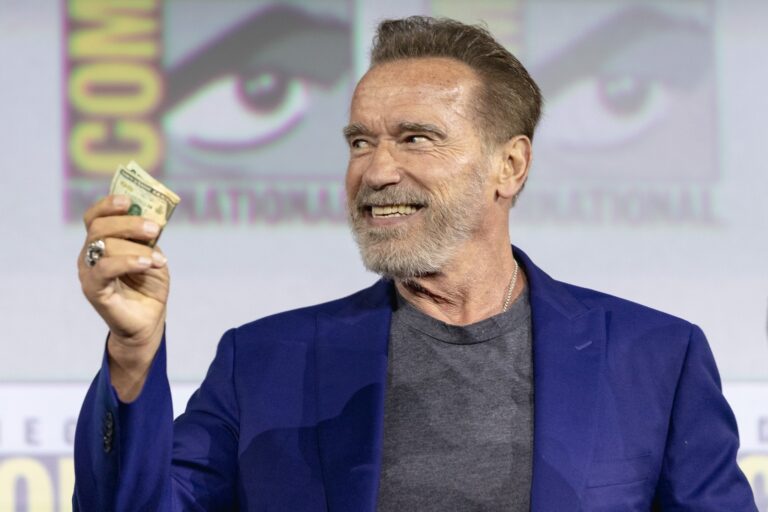 Thursday morning at San Diego Comic-Con marked the first major event in Hall H, as Paramount Pictures offered a look at the upcoming Terminator: Dark Fate. Executive producer James Cameron opened with a livestream message from the set of the Avatar sequels, telling the audience his only goal was “to make the best possible Terminator movie for 2019.”

Cameron mentioned there was a lot of back-and-forth about whether or not to bring Sarah Connor back, and once the decision was made, they knew Linda Hamilton was only one choice for the role: “there is no Sarah but Linda.” Cameron was apprehensive about approaching Hamilton, but once she agreed to the project, the film was built around the continuation of her story.

Director Tim Miller took the stage after an impressive sizzle reel, joking that despite this being his 25th Comic-Con, the only time he’s been able to get into Hall H was the year he directed Deadpool. Miller also confirmed Terminator: Dark Fate would be R-rated, unlike the last two entries: “the DNA of Terminator is an R-rated fucking movie,” he said. “To not do it R feels disingenuous to the source material.”

Hamilton admitted to some reticence about reprising her most famous role. “I really gave it careful consideration,” she said. “I felt that the first two were very intact, and you kind of want to retire a champion.” But the passage of time and how that would affect a character like Sarah was ultimately what intrigued her enough to return. “I felt there was just a world of richness I could explore, and then rock it as a woman of a certain age.”

The rest of the cast — including Natalia Reyes, Mackenzie Davis, Gabriel Luna and Diego Boneta — had high praise for Miller’s no-nonsense approach to filmmaking. “I had this old Hollywood idea that there’d be like an old Hollywood director with a mega phone,” said Davis. “It’s pretty evident as soon as you start talking to Tim that that’s not his style.”

Arnold Schwarzenegger finally took the stage to a huge ovation, stopping to collect a $20 bill from Luna, who bet that Miller would be able to finish the panel without saying “fuck” more than 4 times. Schwarzenegger felt good about taking the bet, quipping “Tim likes to talk about it, I like to do it.”

The panel concluded with a look at some never-before-seen footage, which felt like a vast improvement over Terminator: Genisys. Whether or not Dark Fate will be received better than its predecessor remains to be seen, and we’ll find out when the film hits theaters this November.