Fantasia 2019 Movie Review: ‘The Art of Self Defense’ 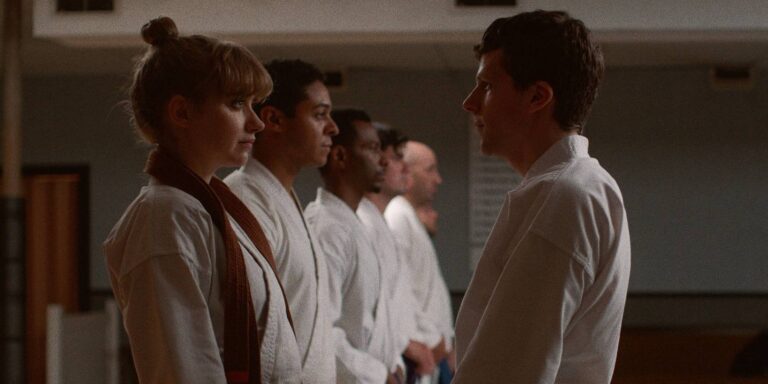 When a meek, anxiety ridden accountant is accosted by a motorcycle gang en route from the grocery store, he joins a local karate dojo to learn how to defend himself from potential future attacks. Based on that setup, you might make assumptions on how the rest of the film will play out, but Riley Stearns gleefully subverts expectations with his latest offering, The Art of Self Defense, an opening night select at the 2019 Fantasia International Film Festival.

Jesse Eisenberg stars as Casey Davies, a soft-spoken office drone who tiptoes through his days at an accounting firm, trying to ingratiate himself with the alpha male douchebags in the break room whose daily chats revolve around favorite sexual positions and disdain for their boss. So disconnected is Casey from the very notion of masculinity that rather than purchase a men’s magazine (which features articles like “Top 5 Breasts” and “Wolf: A Pet or a Man”) he sneaks into a coworker’s office after hours and photocopies the entire thing, hoping to glean enough info to fake his way through a conversation.

Walking home at night with a bag of food for his dachshund, Casey is pursued — and then viciously beaten — by a group of assailants wearing motorcycle helmets. His knee-jerk response is to purchase a firearm, but when he stumbles into a dingy karate studio, something about the strength and discipline emanating from the instructor (Alessandro Nivolo, whose character insists on being addressed only as “Sensei”) clicks for Casey. Soon he’s registering for classes and getting tossed around the room — and having the time of his life.

Initially, Casey is less than honest about his motivations, but after a bit of prodding from Sensei the truth comes out. “I’m afraid of other men — they intimidate me,” he admits. “I want to be what intimidates me.” The solution is simple, at least according to his newfound martial arts master: ensure everything about your life is as masculine as possible. Listen only to metal, drop the French lessons in favor of German, and get rid of the dachshund, because it’s far too feminine.

As Casey gamely throws himself into this new routine, he starts to emerge from his shell, and the results are both uncomfortable and hilarious. Confrontations in coffee shops and cubicles are wildly off-kilter, and Eisenberg sells the preposterousness of this behavior with aplomb. But when Casey is invited to join Sensei’s night class, reserved for only the most elite students, things quickly go off the rails in surprising and unexpectedly violent fashion.

Squarely taking aim at a growing culture of toxic masculinity, The Art of Self Defense is brilliantly satirical and wildly funny, albeit in an excruciating sort of way. Sensei represents the pinnacle of douchebaggery, able to acknowledge the skills of his top pupil, Anna (Imogen Poots in a rage-fueled performance) but refusing to promote her to black belt due to her femininity. “I realize that her being a woman will prevent her from ever becoming a man,” he explains to Casey, without a shred of irony.

It’s that sort of earnest commitment to absurdity that enables us to find humor in otherwise bleak material, and Stearns’ ability to carefully and confidently walk such a fine line is particularly impressive for a sophomore director. The Art of Self Defense is also some of Eisenberg’s best work yet, and he excels at mining humor from one painfully awkward scenario to the next. The film’s tone certainly won’t work for everyone, but viewers accustomed to finding laughs in the darkest corners will have a great time.