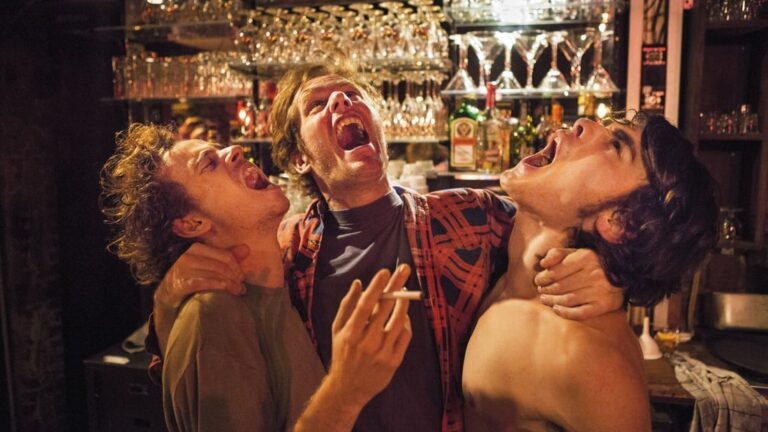 After making a splash with his Oscar-nominated drama The Broken Circle Breakdown, Belgian director Felix van Groeningen was on hand to open the 2016 Sundance Film Festival with his latest feature, Belgica, the story of two brothers who transform a rundown neighborhood bar into the hottest nightspot around.

Jo (Stef Aerts) is the owner of the Cafe Belgica, the type of dive where the toilets are always overflowing and the bartenders consume just as much alcohol as the patrons. His older brother Frank (Tom Vermeir), looking for an escape from what he sees as the mundanity of family life, offers to drop by and help out on the weekends, and uses his connections to convince the lead singer of popular local band The Shitz to put in an appearance.

When word gets around that Cafe Belgica is the kind of joint where a rock singer hangs out to party, business begin to take off, and the brothers decide to take the next logical step by expanding the venue to include a larger performance space that’s more equipped to handle their ever-growing crowds. Frank signs on as Jo’s new business partner, and as the bar quickly becomes the most popular destination around – a “den of depravity,” in Jo’s own words – it seems like the party will never stop.

But the steady supply of money, booze and drugs creates plenty of problems behind the scenes, and both brothers find their personal lives in upheaval: Jo and his live-in girlfriend, Marieke (Hélène De Vos), come to an impasse thanks to differing opinions on how to deal with a particularly significant event, while Frank can’t stop banging waitresses and doing coke long enough to go home and spend time with his wife and child. Resentment sets in, and as the growing hostility between Jo and Frank threatens to boil over, it seems like Cafe Belgica might become an unfortunate casualty of this burgeoning sibling rivalry.

Belgica is elevated by a pair of solid performances from its two leads, and a pulsing soundtrack with plenty of contributions from Belgian electronic band Soulwax. The musical numbers – of which there are many – provide the film’s most stylish sequences, as the patrons and staff float through the club in a dreamlike state of euphoria. But when the glitz and glamour of never-ending nightlife fades away, we’re left with the realization that the themes explored in van Groeningen’s latest effort certainly aren’t anything new, and the story isn’t quite as exciting or engrossing as the music that propels us from one scene to the next.

Felix van Groeningen's follow-up to his Oscar-nominated drama boasts a killer soundtrack and a pair of solid performances, but the overall narrative feels like a story we've already seen too many times.