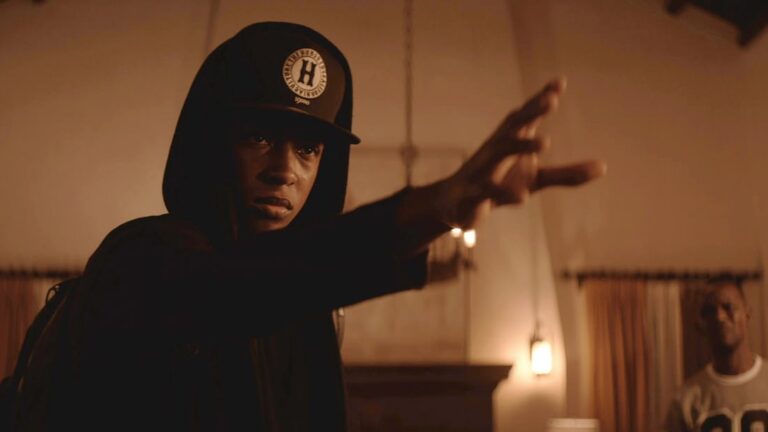 After his mother passes away shortly before the end of his senior year, aspiring street magician Bo (Jacob Latimore) is left as the sole caretaker of his younger sister, Tina (Storm Reid). Performing illusions is gratifying, but it’s not bringing in enough money to keep the rent paid and keep food on the table, so Bo reluctantly falls in with local drug kingpin Angelo (Dulé Hill), with his unique set of skills quickly elevating him to the most successful member of Angelo’s crew.

Bo’s involvement with Angelo is only meant to be a temporary arrangement, but he soon finds himself forced into increasingly compromising situations, especially after another dealer tries to muscle in on Angelo’s territory. As the danger escalates, Bo begins plotting an escape with the help of his new sweetheart, Holly (Seychelle Gabriel), but a grievous miscalculation not only puts him squarely in Angelo’s crosshairs, but also imperils everyone Bo cares about.

Sleight contains elements of drama, comedy, romance and science fiction, but to classify it as any of these things would be a disservice to what director JD Dillard and his team have accomplished. Much like the talented magician that serves as its protagonist, Sleight is always a few steps ahead of the audience, and it’s impossible to predict where the film is taking us next.

With his first feature, Dillard has crafted an exceptionally well-made film that defies conventions at nearly every turn. On the surface, it may seem like Sleight is dealing with some pretty familiar territory, but there’s never been another film that has taken such a unique and original approach to subject matter such as this. It’s a genre-bending masterpiece, anchored by an incredibly versatile cast and an absolutely thrilling climax, and destined to be one of the breakout hits of the 2016 Sundance Film Festival.

An incredible debut that defies genre conventions at every turn, leading to a thrilling climax that will no doubt cement the film as one of the breakout hits of this year's Sundance Film Festival.