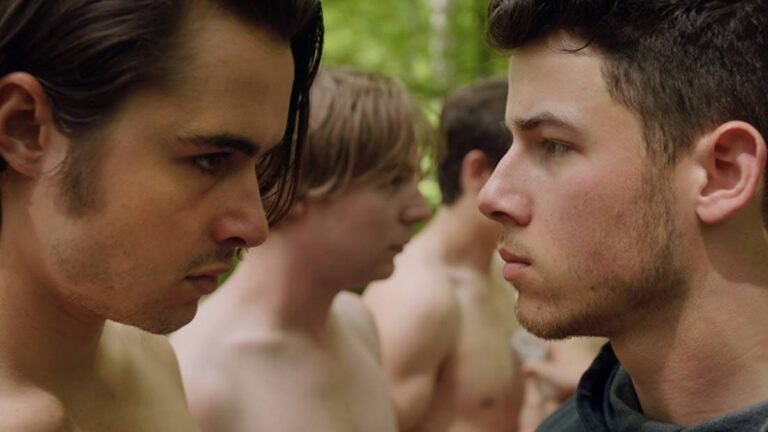 Leaving a party at his brother’s fraternity, Brad Land (Ben Schnetzer) reluctantly agrees to offer a ride to a pair of guys who claim they saw him inside the house. He’s given directions to a remote patch of land outside the city, where he’s brutally beaten, robbed, and left lying on the side of road.

Brett (Nick Jonas) tells his younger brother that this kind of thing would never have been allowed to happen if he had someone to watch his back, and urges Brad to enroll at Brookman College in the fall and pledge the same fraternity. He already knows most of the frat brothers, and this will give Brad more opportunity to chase after the girl he’s been eyeing at parties for the past few months.

The initiation rituals start as you might expect, with the pledges forced to consume outrageous amounts of alcohol without puking or passing out. But as Hell Week continues, the brutal humiliation and degradation inflicted upon Brad and his fellow pledge mates not only forces him to question his own motives, but also finds Brett torn between his loyalty to the fraternity, and his responsibility to take care of his younger brother.

Based on the memoir of the same name, Goat is a harrowing look inside the testosterone-laced “bro culture” that permeates college campuses across the country, where masculinity is often defined by the amount of booze you can put away, the amount of drugs you can ingest, the number of girls you can sleep with, or a combination thereof. The words “pussy” and “faggot” are frequently used to describe the eager-to-please pledges, especially Brad’s roommate Fitch (Danny Flaherty), who admits that he’s not cut out for this kind of thing, but also recognizes that being known as someone who couldn’t take it is a far worse punishment than the daily indignities he’s forced to endure.

The “gentlemen” of Phi Sigma Mu – led by pledgemaster Dixon (Jake Picking) – are shown as having no regard for the safety and well-being of their pledges, and when a tragedy occurs, their only thought is to circle the wagons to make sure the fraternity doesn’t face any disciplinary action. “We’re not doing anything that every other fraternity hasn’t done for over a hundred years,” Dixon declares, and we wonder if he’s having a harder time convincing his brothers, or himself.

With Goat, director Andrew Neel paints a disturbing portrait of the horrors young men face in the name of being “accepted,” and the very real consequences that arise from these scenarios, but the film doesn’t quite come together in the final act. Brad’s opportunity to get closure for his attack isn’t resolved in a satisfactory manner, and his complicated relationship with his older brother isn’t explored as deeply as it could have been.

That being said, Goat simultaneously serves as a chilling exposé into a decades-old culture of exclusion, and a cautionary tale for young men (and parents) who want to learn what “brotherhood” actually looks like.

A harrowing look into fraternity life, and the horrific mistreatment young men will inflict on others (and themselves) in the name of being "accepted." A cautionary tale for students and parents alike.