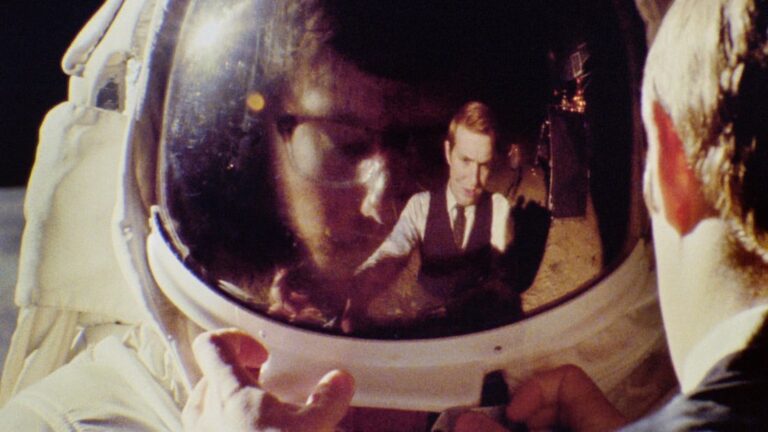 The idea that the United States faked the moon landing is one of the most popular and long-lasting conspiracy theories, having been around in one form or another since the early 1970s. One of the most popular versions of this story is that 2001: A Space Odyssey director Stanley Kubrick worked alongside NASA to manufacture the footage – but what if Kubrick’s only involvement was to explain his special effects techniques to a pair of CIA agents posing as documentary filmmakers, and THEY were the ones who created the footage?

Operation Avalanche, director Matt Johnson’s follow-up to his incredibly compelling debut feature The Dirties, follows the aforementioned agents as they’re sent to NASA to pose as documentarians in an attempt to smoke out a mole that’s been revealing classified space program secrets to Russia. But when they learn that NASA doesn’t have the technology to land on the moon – despite the government’s assertions to the contrary – they see disaster on the horizon.

Matt (Johnson, who also stars) concocts a wild plan that will allow the US to save face in the eyes of the public: just fake the landing. The launch of Apollo 11 would be real, and the space shuttle would indeed orbit the moon as promised, but they would use advanced special effects to create the illusion that astronauts had actually landed on the moon, and beam this footage from the shuttle back down to earth.

Owen (Owen Williams) thinks the plan is insane, but reluctantly agrees to go along with the idea once Matt gains approval from their superiors. But as the agents start to notice strange men taking photographs of them from afar and unfamiliar vehicles parked outside their soundstage, they realize that there are plenty of people who don’t want them to succeed.

Filmed with the same improvised style as Johnson’s previous effort, Operation Avalanche is a wildly inventive new spin on the decades-old conspiracy theory, but even more fascinating and entertaining than the movie itself are the lengths to which the filmmakers went to capture the footage they wanted. Much like the characters they portray, the team posed as a documentary crew to gain access to NASA and shoot inside their facilities, never revealing the true nature of the project.

Likewise, the special effects team does some truly astounding work, including using archive photographs and audio recordings to insert Stanely Kubrick into the film and make him appear as though he’s speaking directly with Matt. It’s an astonishingly realistic achievement created through meticulous attention to detail, made all the more impressive when taking the film’s relatively low budget into account.

Operation Avalanche isn’t meant to tell the “true” story of the moon landing – during the post-screening Q&A, Johnson himself stated that his goal was to create an experience that was “accessible and silly,” and the film certainly accomplishes that. There are some ideas that don’t quite come together, but the combination of the cleverly produced footage and Johnson’s manic energy ensure that Operation Avalanche is entertaining from the first frame to the last.

A funny, engrossing and hugely entertaining spin on the decades-old conspiracy theory involving the moon landing, and a tremendous achievement in low-budget special effects.