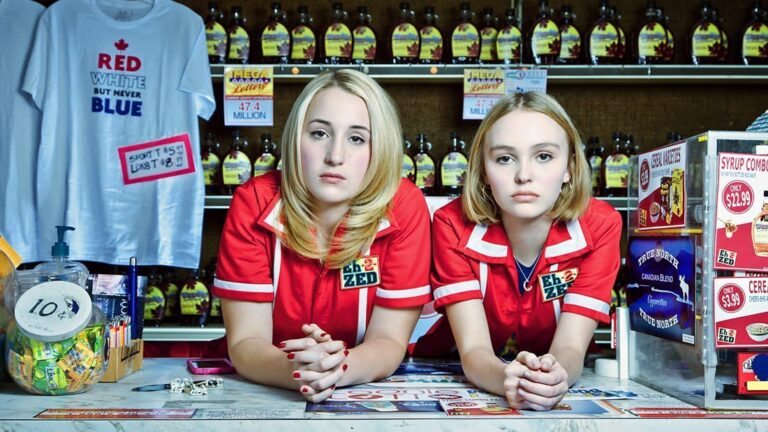 On Sunday night, my first trip to the Sundance Film Festival came to an end with the world premiere of Yoga Hosers, the second installment of writer/director Kevin Smith’s “True North Trilogy,” which sees his daughter Harley Quinn Smith and her real-life pal Lily-Rose Depp reprising their roles from Tusk as a pair of snarky, cell-phone obsessed convenience store clerks.

Some time has passed since the event of the previous film, but Colleen M. (Smith) and Colleen C. (Depp) are still stuck behind the counter of the Eh-to-Zed, rolling their eyes at customers and frequently closing the store for band practice – which takes place in the storage room with the help of a dorky 30-something drummer named Ichabod (Adam Brody).

While the girls are preoccupied with the idea of attending a “grade 12 party” hosted by the object of Colleen M’s affection (Austin Butler) and his goofy sidekick (Tyler Posey), strange things are happening in their tiny Canadian town. After a late night rendezvous goes south, the convenience store is overrun by murderous little humanoid creatures made of bratwurst and wearing Nazi uniforms, who explode into sauerkraut after meeting the business end of a hockey stick (or being stuffed into a microwave).

If you’re thinking Yoga Hosers can’t possibly get any more absurd than this, you’re wrong. For starters, the film also boasts the return of Tusk‘s bumbling detective Guy LaPointe (Johnny Depp), who somehow manages to be even more irksome and less funny than his previous appearance, and whose signature mole not only wanders all over his face from scene to scene, but also begins to multiply (during the post-film Q&A, Smith revealed that this device was Depp’s idea, and I can’t help but wonder if neither of them remembered that this same gag was used in Robin Hood: Men in Tights, to far greater effect).

There’s also a pair of Satanists, the founder of the Canadian Nazi Party (Haley Joel Osment), and a former sculptor (Ralph Garman) who communicates mostly via celebrity impersonations, and whose recent emergence from a cryogenic sleep has led him to create a hulking creature for the sole purpose of destroying the critics that turned on him when his art got a little too strange – sounds familiar, doesn’t it?

After a scene-stealing appearance in Tusk, Harley Quinn Smith and Lily-Rose Depp take center stage for their own adventure, imbuing the film with frenetic, gleeful energy. Both girls are charismatic and talented, capturing the sarcasm and sensibilities of modern youth and its dependency on cell phones and social media. If Yoga Hosers does one thing right, it’s providing the aspiring actresses with a platform to showcase their talents.

With its pair of teenage stars and complete lack of Smith’s trademark R-rated dialogue, Yoga Hosers feels about as far removed from the director’s early work as possible, and fans of Mallrats and Dogma will likely be in for a big surprise here. But as Smith himself noted during the lengthy introduction, “I used to want to make movies for audiences. But if you’ve seen Tusk, and after you’ve seen Yoga Hosers, you’ll see that I really don’t give a shit about the audience anymore.”

This comment wasn’t meant to be inflammatory, although many outlets took it a such. Smith elaborated by explaining that he’s reached a stage in his career where he’s no longer interested in making movies for other people – he wants to make movies for himself. In this case, Smith got to work with his entire family, as well as his daughter’s best friend and her parents, and as crazy as this film is, there’s no denying that it must have been an incredibly enjoyable experience to put together.

So while there are plenty of things about Yoga Hosers that don’t work – such as the goofy, barely coherent plot and over-reliance on clichéd Canadian jokes – it doesn’t really matter, because we’re not the target audience. No longer concerned with critical response or commercial success, Smith is taking more risks than he ever has before, and seems to be having a hell of a lot of fun doing so. If only the rest of us could enjoy that sort of freedom.

With its teenage stars and lack of R-rated dialogue, Yoga Hosers feels about as far removed from Smith's early work as possible. There are plenty of things that don't work here, but you've got to applaud the director for continuing to take risks and try something new.