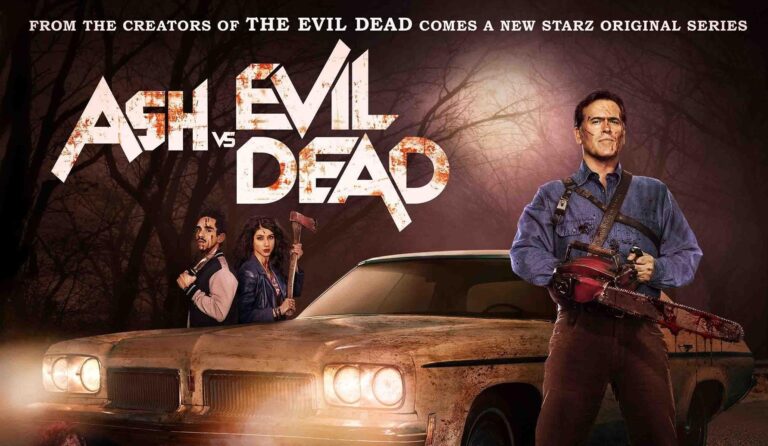 Evil Dead and Army of Darkness fans will finally get what they’ve been clamoring for during the past two decades this Halloween – Ash (Bruce Campbell) returns to kick some Deadite ass. If the first episode is any indication, it was worth the wait because with an excellent creative team, the right cast, and the uncensored TV format STARZ provides, Ash vs Evil Dead doesn’t miss a beat returning the bloody cult favorite to pop-culture prominence.

It’s been 30 years since Ash Williams last faced the Deadites in the cabin (Army of Darkness is not part of the continuity, per our recent interview with Bruce Campbell) and the demon fighter hasn’t done much with his life since. Well, except just recently he may have, in an act of self-absorbed carelessness, accidentally called back the Deadites to our world. So there’s that.

When destiny calls, Ash and his fellow Value Stop co-workers (not S-Mart. Sad face.) Pablo (Ray Santiago) and Kelly (Dana Delorenzo) find themselves in the eye of the demonic storm, and Ash must once again call forth the hero inside him.

The first episode, El Jefe, was directed by Sam Raimi himself and does a great job capturing the trippy, frantic spirit of the original Evil Dead (or Evil Dead 2, if you’re being a stickler). Much to the delight of franchise fans, Bruce Campbell is absolutely back to form as Ash. “The Chin” looks younger than he has in years and at times (especially near the end of the episode) you could believe this sequel was made 15 years ago.

El Jefe also really benefits from Raimi’s direction, and his work hasn’t felt this “Raimi”-esque since perhaps Spider-man 2. His now classic first person camera shots, feverish close-ups, and ridiculous carnage are at their entertaining best here. Aside from a few odd early comedic beats, the episode really nails the humor and horror and look of the original – and that is certainly due to Raimi’s involvement.

Ash vs Evil Dead also takes full advantage of being on an uncensored network like STARZ. Aside from the obvious freedom with the blood and gore, this is an Ash you haven’t seen before – I’m talking sex, drugs and… well, rock n’ roll. We see our hero get into some fairly compromising situations involving those first two, nothing too graphic, but still a new side to the character.

Early on, the episode does a feel a bit off as Ash is whoring his way through his later years and the script is attempting to introduce the new characters. But at about the midway mark, when the Necronomicon starts to really wreak havoc, is when Ash vs Evil Dead really springs to life and recaptures that old magic.

The episode has many moments that invoke the best of both Evil Dead and Army of Darkness (even though the latter isn’t canon for this series). The practical makeup and creepiness of the Deadites in the cabin are brought back again, but this time inside an abandoned house, while the Army of Darkness style was very much reflected in a freaky, yet weirdly hilarious showdown with a Deadite babydoll. Think Ash vs tiny Ash in Army of Darkness and you’ll get the idea. The episode does employ some CG effects for some more outlandish graphic gore, but generally they never look better than the practical effects.

Since Ash vs Evil Dead is the first foray of the franchise into television, the show wisely surrounds Ash with an ensemble team. Aside from his aforementioned co-workers, police officer Amanda Fisher (Jill Marie Jones) has her Deadite run-in inside the abandoned house and seems intriguingly tied to the demonic forces in an unknown, yet possibly similar way as Ash. Fans also know Lucy Lawless is part of the cast, but her character of Ruby only has a brief, but very interesting cameo involving Fisher.

I also appreciate that Ash’s cohorts are all fairly regular-looking people and producers Raimi, Tapert and Campbell didn’t surround Ash with young attractive CW-type teens. Santiago as Pablo is particularly fun as the optimistic sidekick that believes in Ash.

When the first episode of Ash vs Evil Dead is over (and a very Spartacus-style end credit graphics start) the pieces are mostly in place for the remainder of the season. The show has a shorter running time of 30 minutes compared to more standard 60-minute format you’d find in these types of shows. But the episode is packed very dense and has to move swiftly to establish its back story and new characters. Once you get past the somewhat slow build-up, Ash truly returns and most importantly: is done right. And that’s about as groovy as it gets.

Aside from a few early odd comedic moments, the first episode brings Ash Williams back in near pitch-perfect fashion. Bruce Campbell steps right back into the character like a chainsaw glove and Sam Raimi's direction make this feel like the beginning of the sequel we've all been waiting for.