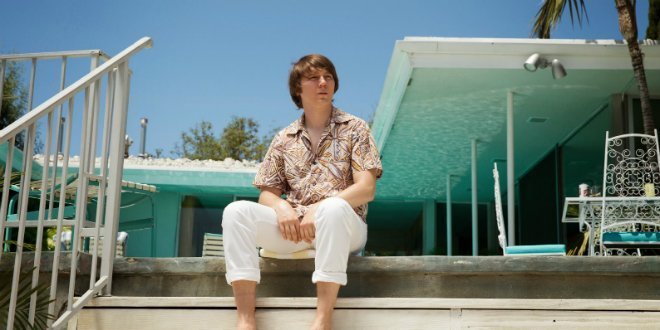 While I generally enjoy most music biopics, it’s hard to argue with the fact that most of them tend to subscribe to a very familiar pattern. Every once in awhile, a film comes along that breaks the mold – Todd Haynes did it in 2007 with I’m Not There, which featured six different actors portraying Bob Dylan at various points in his career. That film’s writer, Oren Moverman, offers a similarly unconventional approach to Love & Mercy, which hones in on two critical periods during the life of Beach Boys songwriter Brian Wilson.

We first encounter Brian (Paul Dano) during the 1960s, shortly before the band is scheduled to head out for a tour of Japan. Reluctant to return to the road, Brian convinces his brothers that he belongs at home in the studio, where he’ll be more effective at creating the band’s next album. The boys finally acquiesce, and Brian hires a collection of studio musicians to begin crafting what would ultimately become Pet Sounds.

Our next encounter with Brian comes during the 1980s, where he’s portrayed by John Cusack. Brian meets, and attempts to court, Cadillac saleswoman Melinda Ledbetter (Elizabeth Banks), but she quickly discovers that Brian’s life is not his own when she meets Dr. Eugene Landy (Paul Giamatti), his therapist and legal guardian. Landy controls every aspect of Brian’s existence, from his diet to his personal relationships, all the while insisting that he has Brian’s best interests at heart.

The film frequently cuts between these two periods in Brian’s life. We see the depths of his imagination and creativity as he employs a range of nontraditional elements to record Pet Sounds, desperately trying to bring to life the music he hears in his head, and all the while sliding further and further into the grip of severe mental illness. And we see the results of that illness, as Brian becomes a timid, broken man, cut off from his friends and family, allowing himself to be controlled and manipulated, and never able to find peace.

Director Bill Pohlad does a marvelous job of illustrating the parallels between each onscreen version of Brian Wilson, and both actors give brilliant, emotional performances. Dano in particular turns in what can arguably be called the best work of his career, perfectly embodying Brian’s childlike glee as he excitedly flits around the studio, and capturing the anguish and desperation as his mind continues to deteriorate.

Unorthodox in its approach and admirable in its complexity, Love & Mercy wisely chooses not to paint a definitive portrait of a man whose life couldn’t possibly be summed up in a two-hour film. By confining the narrative to these two specific chapters, we’re able to go far beyond the surface and reveal the inner workings of a tortured genius, and shed light on a story that few people are familiar with. Love & Mercy is a truly exceptional film about the internal and external struggles of a truly exceptional person, and is one of the most emotionally resonant experiences I’ve had with a film this year.

Unorthodox in its approach and admirable in its complexity, Love & Mercy is an exceptional film and an emotionally resonant experience that goes far beyond the surface to reveal the inner workings of a tortured genius.