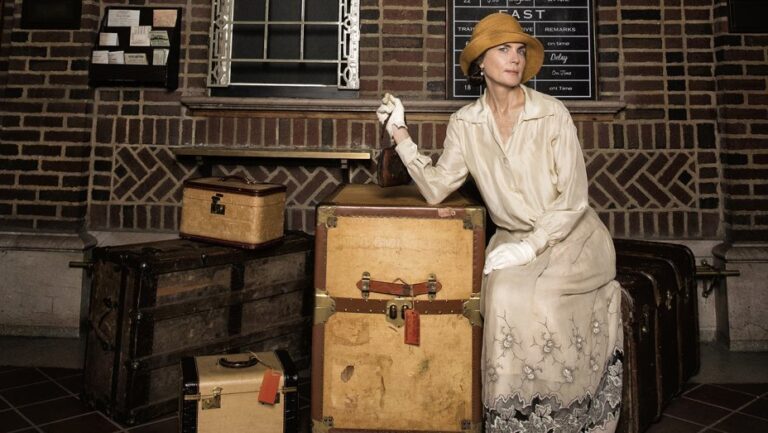 Louise Brooks was an icon of the Jazz Age, a trendsetting star of the silent screen whose bob hairstyle and short skirts became synonymous with the flapper image. But before her face was plastered on movie posters, Brooks was a teenage girl from Kansas who dreamed of moving to New York and becoming “the best dancer in the world.”

We first meet Brooks (Haley Lu Richardson) on the cusp of this dream: she’s been accepted to the prestigious Denishawn School of Dance and Related Arts, but her socialite mother (Victoria Hill) is in need of a chaperone to accompany the 16-year-old prodigy to the Big Apple. Enter Norma Carlisle (Downton Abbey‘s Elizabeth McGovern), an unhappily married middle-aged local who immediately recognizes the talent Louise possesses and wants to help nurture that gift. But Norma has her own motives for taking a trip to New York: she spent the first few years of her life in an orphanage, and hopes to find the identity of her birth parents.

The train is barely out of Wichita before we begin to see just how different these two women are. Free-spirited Louise enjoys the attention of the handsome young men aboard, leading Norma to caution her about the dangers of perceived impropriety. “Men don’t like candy that’s been unwrapped,” she warns. “It may look clean, but they don’t know where it’s been.” Louise responds by bursting into laughter, as if she can scarcely believe this woman could be so prudish.

The Chaperone begins to lose steam when the women arrive in the city and we realize the film won’t be focused on Louise and her ascent to stardom. Instead, Norma’s quest to discover where she came from takes center stage, with Louise being relegated to an adversarial role, frequently baiting Norma into arguments and defying her instructions. The screenplay by Julian Fellowes envisions Louise as bratty and self-centered, which may not be far from the truth but paints a rather unflattering and one-dimensional portrait of a Hollywood legend.

Directed by McGovern’s fellow Downton Abbey alum Michael Engler, The Chaperone offers both actresses an opportunity to shine: McGovern is especially great during a flashback sequence where she discovers a horrifying secret about her husband (Campbell Scott), and Richardson radiates a wild energy that makes us long for her to reprise this role in a biopic of her own. But strong performances aside, the narrative has far too many contrivances to feel authentic or genuine, particularly in bookend sequences that imagine the women reconnecting after twenty years.
Norma’s journey of self-fulfillment might have been more enjoyable as a standalone tale, but when married to the early days of Louise’s career it feels positively banal, and we can’t escape the feeling that something far more interesting is happening offscreen while we’re stuck with Norma.