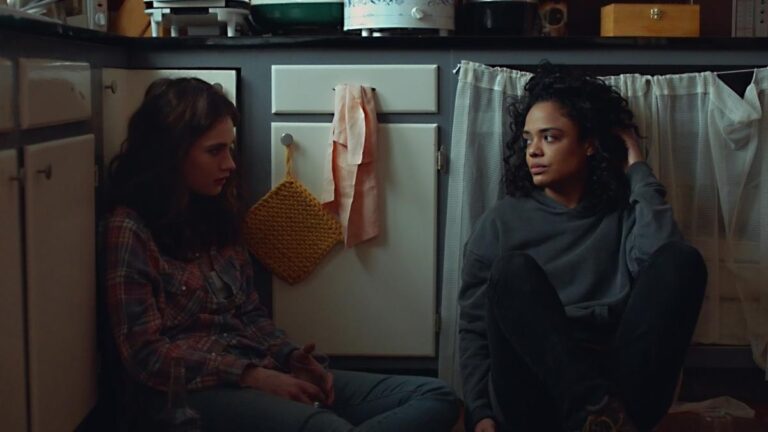 Like the other residents of Little Woods, North Dakota, Oleander “Ollie” King (Tessa Thompson) does what she needs to survive. In the past, this has included transporting prescription pills across the Canadian border, which provided a steady flow of income and ensured her terminally ill mother received her cancer medication. But when we catch up with Ollie, it’s clear something has gone wrong: she’s just buried a mysterious bag in the woods and is fleeing an approaching border patrol vehicle.

Fast forward sometime later and Ollie’s mother has passed away, she’s earning cash by selling coffee and breakfast to oil workers, and she’s less than a week away from the end of her probation. But life is never easy: the bank is about to foreclose on the family home, and her sister Deb (Lily James), who lives in an illegally parked motor home with her six-year-old son, has just announced that she’s pregnant again, by the same alcoholic deadbeat (James Badge Dale) that fathered her first child.

With precious few days to come up with thousands of dollars, Ollie reluctantly elects to get back in the game, hoping to stay off the radar of her kindly probation officer, Carter (Lance Reddick). At first, she sells only to people who actually need painkillers: elderly townsfolk who can’t afford health insurance and injured workers who the US medical system has clearly failed. But when she expands her market to include truck drivers, rodeo cowboys and other recreational users, she runs afoul of the local opioid kingpin (Luke Kirby).

The somber, haunting mood of Nia DaCosta’s debut film is reminiscent of other neo-Westerns like Winter’s Bone and Hell or High Water, but the difficult and complex relationship between Ollie and Deb (expertly brought to life by Thompson and James) is the biggest strength of Little Woods. The film also sheds light on the real-life hardships wrought by a health care industry focused more on profitability than actually providing care: as Deb consults a nurse about the costs associated with carrying a child to term while uninsured, she gasps in disbelief “Being pregnant costs nine thousand dollars?”

Thompson has been a fascinating actress to watch over the past few years as her filmography has become more and more diverse, and she once again proves herself adept at disappearing almost completely into a role. But it’s James (once again adopting a very convincing accent, as she did in Baby Driver) who actually emerges as the most compelling character, and the one tasked with carrying the film’s most heartbreaking scene, a tearful encounter with with Deb’s ex that feels almost impossibly genuine.

The perils of poverty are front and center in Little Woods, and anyone that has ever wondered where their next meal might come from will certainly relate to Ollie and Deb’s struggles. But DaCosta neglects to explore — or even acknowledge — the impact Ollie herself is having on the community by supplying drugs at bargain basement prices. Nobility of her intentions notwithstanding, she’s still contributing to an ever-growing crisis, and the film might have been elevated had Ollie been forced to truly reckon with her choices.