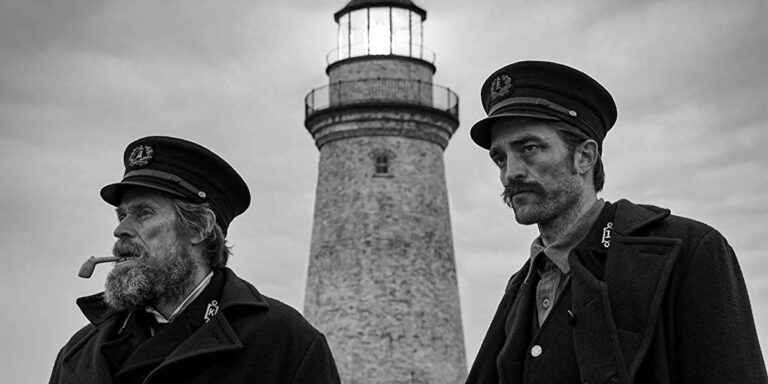 A frantic fog-enveloped fever dream about isolation, paranoia and madness, The Lighthouse is director Robert Eggers’ follow-up to his acclaimed feature debut, The Witch. Set in the 1890s on the rocky shoreline of an unnamed island in New England, the film follows two lighthouse keepers — the crusty and cantankerous seadog Thomas Wake (Willem Dafoe) and his new apprentice, Ephraim Winslow (Robert Pattinson) — as they settle in for a four-week stint.

Flatulent and foul-tempered, Thomas wastes little time in establishing the power dynamic: as the veteran, he’s the only one permitted to tend the light, while Ephraim is responsible for shoveling coal into the furnace, mucking out the cistern, and hauling barrels of oil up and down the winding lighthouse staircase. At night, Thomas swigs from a bottle of rum and chomps his corncob pipe while lamenting his failed marriage — “thirteen Christmases at sea, little ones at home, she never forgave it” — while Ephraim is tormented by dreams of washed up bodies and screeching sirens with mermaid tails.

As the days stretch on and a brutal Nor’easter pelts the island with rain and wind, the “wickies” begin sharing the bottle over dinner — and when the rum peters out, they switch to kerosene. Nights of drunken revelry, with both men dancing around the ramshackle cottage and belting out sea chanties, breed camaraderie at first, but this gradually gives way to suspicion. With Ephraim so cagey about his past, Thomas knows the young lad must be hiding something, and Ephraim suspects the elder keeper’s logbook is full of secrets — why else would he keep it under lock and key? And more importantly, what mystery lies at the top of the lighthouse that Thomas is so intent on keeping to himself?

Shot in a nearly square 1.19:1 ratio that accentuates the island’s cramped quarters and tight spaces and lends an air of claustrophobia to the experience, The Lighthouse is a masterful piece of cinema that features two of its best performers locked in a contest of wills, matching each other at every turn. Dafoe is no stranger to chewing scenery, but he positively devours it here with violent outbursts and wild-eyed rants, laced with a thick Maine accent and spewing violently from his unruly tangle of facial hair. His bellowing, minutes-long prayer for the god of the sea to strike Ephraim down because the younger man refused to compliment his cooking — shot in a single unbroken take — is one of my favorite cinematic moments of the year.

Pattinson may play Ephraim as the more reserved of the pair, but his performance doesn’t want for intensity, particularly as the nightly visions become more vivid and Ephraim questions where reality ends and the hallucinations take over. The film itself is fairly ambiguous in this regard, and even the passage of time is something the keepers gradually lose track of. “How long have we been on this rock?” Thomas ponders. “Five weeks? Two days?”

As the tensions between the two men finally come to a boil, Eggers gleefully steers The Lighthouse from nerve-wracking psychological thriller to full-on insanity, with a dose of pitch black humor for good measure. The final moments are somewhat anticlimactic, largely because the second act is so incredibly strong the climax can never quite reach those same heights. But even with a finale as rocky as the shoreline on which Thomas and Ephraim are stranded, the film is an absolute must-see, a brilliant shining beacon in a sea of stagnant cinema, guiding viewers through the storm toward salvation.