Movie Review: ‘The Trial of the Chicago 7’ 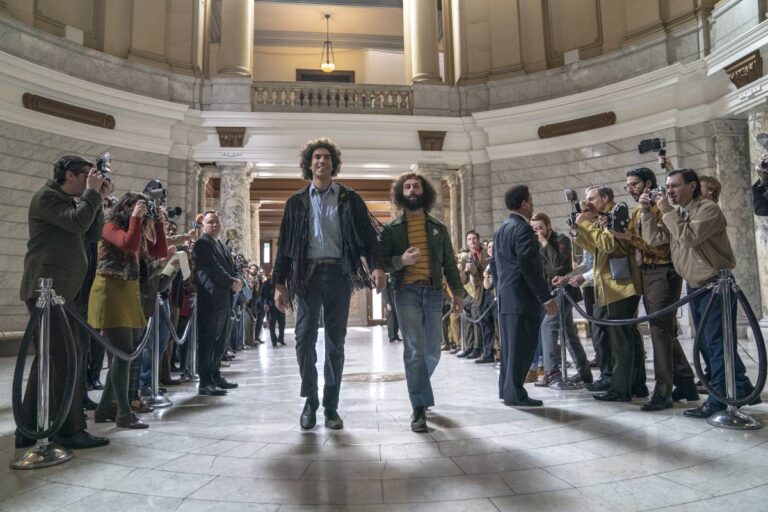 There’s something chilling about watching uniformed police officers confront a group of protestors, remove their badges and nameplates, then wade into the crowd indiscriminately swinging fists and riot batons. That description of events could refer to a number of American cities, from Portland to Louisville, where civil unrest and peaceful protests have escalated into violent confrontations with law enforcement over the past few months. But in this case, we’re referring to events that occurred in August 1968, when a rally in Grant Park became the basis for trumped-up charges against a group of anti-war protestors, stirringly depicted in Aaron Sorkin’s The Trial of the Chicago 7.

Before we arrive at this pivotal clash, Sorkin treats us to a zippy opening montage that sets the table: Lyndon Johnson is sending more troops to Vietnam and increasing the monthly draft calls, Martin Luther King Jr. and Robert F. Kennedy have been assassinated, and various anti-war groups — the Students for a Democratic Society, led by Tom Hayden (Eddie Redmayne) and Rennie Davis (Alex Sharp); the Youth International Party, also known as the “Yippies,” led by Abbie Hoffman (Sacha Baron Cohen) and Jerry Rubin (Jeremy Strong); and The MOBE, represented by David Dellinger (John Carroll Lynch) — are converging on the Democratic National Convention in Chicago to protest the nomination of Hubert H. Humphrey, who activists believe is too closely aligned with Nixon in his positions on the Vietnam War.

Six months after the event, with Nixon in power and ruthless new Attorney General John Mitchell (John Doman) heading the Justice Department, rising star prosecutor Richard Schultz (Joseph Gordon-Levitt) is summoned to charge eight men with conspiracy to incite a riot under the Rap Brown Act, a law passed by Southern whites in Congress to limit the free speech of black civil rights activists. Mitchell is aware of the law’s origins, but he’s more concerned with what it can accomplish than why it was created. “I deem these shitty little fairies a threat to national security,” Mitchell growls. “So they’re gonna spend their thirties in a federal facility.”

In addition to the leaders mentioned above, charges are also levied against Black Panther chairman Bobby Seale (Yahya Abdul-Mateen II), who was in Chicago to give a speech and had no part in organizing the protests. That little factoid doesn’t matter much to the prosecution, because they can exploit the reputation of the Panthers — many of whom show up in the courtroom to support Bobby — in order to strike fear in the jurors and create bias toward the group as a whole. The final two defendants are MOBE members Lee Weiner (Noah Robbins) and John Froines (Danny Flaherty), neither of whom seem to have any reason to be there in the first place. “This is the Academy Awards of protests,” Weiner quips. “It’s an honor just to be nominated.”

If you’re scratching your head at the number of defendants, don’t worry — after egregious treatment at the hands of cantankerous Judge Hoffman (an excellent Frank Langella), including a refusal to postpone due to absence of legal representation and perhaps the most shocking act of ignominy to ever occur inside an American courtroom, one man will be granted a mistrial and excused from the proceedings. Of the remaining Chicago 7, it’s Tom and Abbie that Sorkin hones in on, presenting them as revolutionaries trying to accomplish similar goals with wildly different tactics, succinctly communicated in the way they conduct themselves in the courtroom: Tom gets a fresh haircut and remains quiet and polite at the defense table, while Abbie and Jerry arrive one day clad in judge’s robes. When Hoffman demands they remove the garb, they gleefully reveal themselves to be dressed in police uniforms underneath.

Tom bristles at Abbie’s disrespect of the institution, but Abbie recognizes the trial for what it is: a political railroading, and with every newspaper and television station covering the proceedings, he’s not about to pass up the opportunity to make a statement. “It’s a revolution,” he tells Tom. “We may have to hurt some people’s feelings.” Trying to keep the peace — and keep everyone out of jail — is defense attorney William Kunstler (Mark Rylance), who doesn’t quite buy into the notion that his clients were hand-picked to serve as an example. “There’s no such thing as a political trial,” he tells Abbie. But as the trial drags on, with Judge Hoffman overruling nearly every objection, suppressing key testimony, and handing out contempt of court charges like Halloween candy, Kunstler is forced to meet the ugly truth head-on.

The Trial of the Chicago 7 is Sorkin’s second time working behind the camera (after Molly’s Game in 2017) and his direction feels remarkably more assured than his debut effort, but where the film truly shines are in its superb ensemble cast, and its dialogue. Sorkin proved himself a master of the courtroom drama with A Few Good Men, and 28 years later shows that his ability to weave witness testimony, cross examination and clashes between opposing counsel into riveting, edge-of-your-seat cinema is just as sharp as it was then. He even borrows from that film’s playbook, casting an A-list actor (we won’t spoil it here) in the role of a last-minute witness who makes a colossal impact.

The performances in The Trial of the Chicago 7 are uniformly great, especially Jeremy Strong’s characterization of Jerry Rubin as a sharp-minded intellectual with a speech pattern akin to that of Tommy Chong. A cursory review of Rubin’s televised interviews from this time period show this to be far from historically accurate, but it allows for some brilliant comedic moments. Yahyah Abdul-Mateen II is also electrifying, boiling with righteous fury over the court’s flagrant and frequent violations of his rights. It’s Sacha Baron Cohen, however, who chalks up the film’s best work — he doesn’t quite nail Abbie’s Boston accent, but he definitely captures the late activist’s spirit, particularly in the third act when he finally takes the witness stand. Sorkin peppers in bits of dialogue straight from the court transcripts for this moment, and Cohen absolutely crushes the material.

Originally meant as a directorial vehicle for Steven Spielberg before the 2007 Writer’s Guild strike put the project on the shelf for more than a decade, The Trial of the Chicago 7 could not have arrived at a more relevant time. The parallels between the 1968 demonstrations and the Black Lives Matter protests, both marked by violent skirmishes with law enforcement, are impossible to ignore, and much like what we’re seeing today, it was never really about the violence — if that had been the case, then it would have been members of the Chicago police department sitting at the defense table. But what the government truly took issue with was the fact that people like Tom Hayden and Abbie Hoffman had the audacity to speak up in the first place.

“I’ve never been on trial for my ideas before,” Abbie tells Schultz during the film, and indeed those ideas should have been Constitutionally protected. But against the backdrop of modern America, more than 50 years after the events it depicts, Sorkin’s film serves as a reminder — or perhaps a warning — that Constitutional protections only extend as far as those in power will allow, and that’s a terrifying proposition.