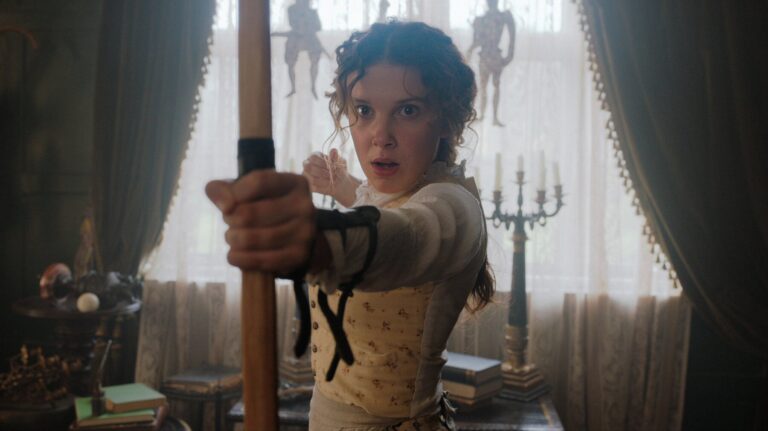 Millie Bobby Brown has been pegged for superstardom ever since turning heads with her breakout role in hit Netflix series Stranger Things, and this week she returns to the streaming giant with a starring role in Enola Holmes, following the exploits of Sherlock’s equally brilliant teenage sister. Raised in isolation by eccentric mother Eudoria (Helena Bonham Carter) and spending her days learning archery, chemistry and martial arts, Enola awakens on her 16th birthday to discover the family matriarch has gone missing.

Enlisting the help of her older siblings doesn’t exactly bear fruit: while Sherlock (Henry Cavill) deduces their dear mother willingly absconded, rather than suffering some terrible fate, he doesn’t seem terribly motivated to ascertain her whereabouts or the motive behind her disappearance. Meanwhile, Mycroft (a stern and stuffy Sam Claflin) is aghast at the state of the manor and the discovery of Eudoria’s progressive beliefs. “Oh God, feminism,” he says, grimacing at a copy of John Stewart Mill’s The Subjection of Women. “Perhaps she was mad. Or senile.”

The eldest Holmes is keen to rid Enola of their mother’s influence, making arrangements to ship her off to Miss Harrison’s Finishing School, whose headmistress (Fiona Shaw) specializes in churning out proper young ladies and isn’t afraid to dole out a swift smack when one of her charges steps out of line. “We need to break her and build her up,” Mycroft insists, and the prospect of being groomed for nothing more than to attract a husband is enough to send Enola out on her own to track down Eudoria. Disguised as a boy, she hops a train headed for London, and stumbles into an encounter with a young Lord (Louis Partridge) on the run from his family — and unknowingly embroiled in an assassination plot.

Based on the YA series by Nancy Springer, Enola Holmes serves as an excellent starring vehicle for Brown, full of plucky energy, genuine laughs and surprisingly competent action. But with its themes of feminism and equality, and its setting against the backdrop of the political fight over the Representation of the People Act 1884, the film is also smarter than it might appear on the surface. It criticizes the cruelties of “polite society” and takes the patriarchy to task over its dismissive attitude toward anyone that pushes back against societal norms, striking an especially expedient chord in the wake of Ruth Bader Ginsburg’s death and the run-up to the 2020 Presidential Election. “Politics don’t interest you because you have no interest in changing a world that suits you so well,” one character tells Sherlock, and the statement cuts deep because she’s absolutely correct.

Fleabag director Harry Bradbeer adopts the same frequent fourth-wall breaking that Phoebe Waller-Bridge utilized so well in that series, with Brown frequently turning toward the camera and addressing viewers directly, but in Enola Holmes the results are decidedly more mixed. The fault lies not with Brown’s cheerful narration, which remains endearing throughout, but rather Jack Thorne’s screenplay, which often finds Enola going out of her way to expound on events and happenings that don’t particularly warrant explanation. This type of narrative device can work wonders if employed sparingly, but the film goes back to the well a few too many times and ultimately runs the gimmick into the ground.

Enola Holmes is clearly aimed at a younger audience, but there’s nevertheless something here for everyone to enjoy. Brown is delightful in the leading role, Claflin is magnificently aggravating as a secondary villain of sorts, and the devilishly handsome Cavill is effortlessly charming as the world’s most famous detective. The film’s open-ended resolution practically screams “franchise opportunity,” and you’ll get no argument from us, especially if these key players remain attached and future entries turn out to be as lively and enjoyable as this one.