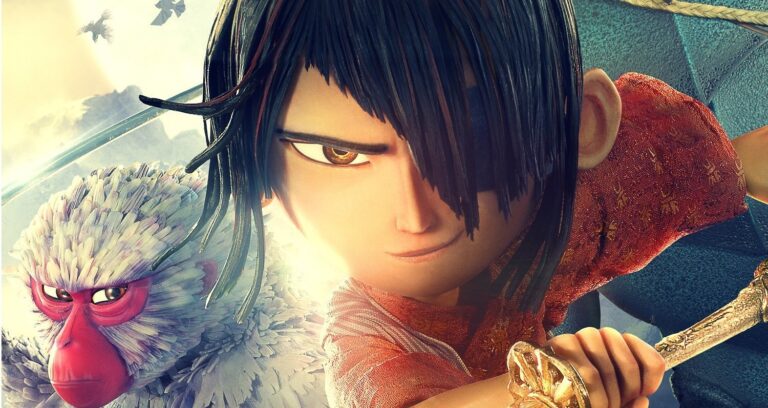 In a summer that has been dominated by phasers, proton packs and villains of ‘The Bat,’ it’s nice to see something else return to the big screen: stop-motion animation. This incredibly skilled medium resurfaces from time to time to show us there are other options besides CGI. The team at LAIKA Entertainment started thinking about their newest film five years ago, and since that time have designed, built and painstakingly moved puppets millimeter by millimeter to bring us Kubo and the Two Strings.

First time director (and CEO of LAIKA) Travis Knight takes us on a journey full of mystery, magic and adventure. After an ominous opening we find Kubo and his mother living in a cave on a cliff overlooking the ocean. Traveling to town daily, Kubo (Art Parkinson) earns coins by telling tales using his guitar. He magically manipulates pieces of paper through music while narrating a story, turning them into automated origami characters acting out his words. Kubo’s mother is oddly adamant that he be home by dark until one evening Kubo stays out past the odd curfew and we learn there are other family members in this tale.

After a run in with two of my favorite (although admittedly not entirely original) character designs of the movie, the Sisters played by Rooney Mara, Kubo sets off on his journey to find a mystical sword and set of armor to defeat the evil that has materialized. To help in his quest we are first joined by the stern and overbearing Monkey played by Charlize Theron, who is cast perfectly as a character with a rough exterior, nuanced with sincerity that shines through at times, partially because of the outstanding work done by the puppeteers at LAIKA.

Later, the duo is joined by the aloof and comedic samurai cursed to live life as a part beetle, part man named…well…Beetle (Matthew McConaughey). Honestly, I had no clue McConaughey was in this movie up to this point since all of the advertising leaned heavily on Theron and Ralph Fiennes (who we’ll get to later). For the most part he worked well as the comedic character, however some jokes really fell flat. Also, while I admire that he tried to step out of his comfort zone and disguise his voice, he came out sounding almost like a weird Tim Allen/Buzz Lightyear.

Kubo and the Two Strings is entertaining for most of its 101 minutes, however there were points in the film where I wondered if parents were squirming in their seats, praying for the next action sequence before their kids got bored. That is not meant to be a jab at the film. Love, loss, physical and emotional damage – to its credit, Kubo deals with some interesting themes and concepts that may go over the heads of a younger audience. On top of that, there are sequences that could definitely come across as frightening to a young child.

One sequence that, unfortunately, will probably not seem frightening or suspenseful is the end of the film. Not only is Ralph Fiennes underutilized as the film’s villain, the Moon King, but the character itself is hardly in the movie. We hear little snippets about the villain throughout the film but never really enough to connect with the character. By the time we do see him for a significant amount, the payoff is lackluster and the final action sequence is not nearly as entertaining as some of the earlier scenes.

It seems to be a common theme, but I wish I had not seen this film in 3D. The colors were muted and the artistic style of the stop-motion puppeteering was smeared. After coming home, I saw a trailer on the television and thought “Wow, look at how bright, vibrant and dynamic that looks! Is that the same movie?!” Also, I recommend staying through part of the end credits. After the main sequence introduces the voice cast, they actually show some of the work the puppeteers go through to make the magic happen. It’s a window into what it took to make a particularly neat part of Kubo’s quest.

Kubo and the Two Strings is both a story we have seen a thousand times, and like nothing we have seen before. It’s an engaging tale that sometimes pushes the limits of what the target audience can comprehend, while other times falls into a predictable rhythm that ultimately ends on a boring note. LAIKA continues to leap forward, pushing the limits of stop-motion animation and puppeteering to bring a film that is most likely to pop in 2D rather than the dim, smudgy byproduct of 3D film.

An engaging tale that sometimes pushes the limits of what the target audience can comprehend, while other times falls in to a predictable rhythm that ultimately ends on a boring note.