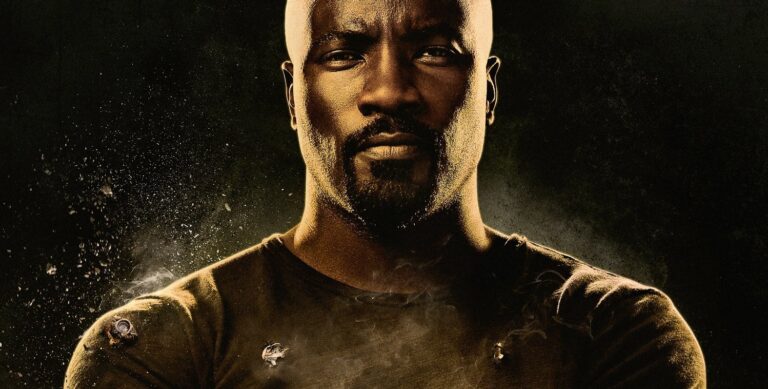 As Marvel fans that have watched Netflix’s Jessica Jones know, Luke Cage (Mike Colter) is a baaaaad motha, and now the indestructible man from Harlem is getting his story fleshed out with his own series. Netflix was kind enough to provide us with screeners of the first seven installments of the thirteen-episode “street level hero” series and yet again, Netflix and Marvel have a winner on their hands.

Luke has been laying low since the events of Jessica Jones, having taken up with local barbershop father figure Pop (Frankie Faison) in Harlem, while trying to live a humbled, quiet life as a fugitive. But much like every revenge story ever told, a tragedy happens that forces Luke to come out of hiding and become a hero to take on local gangster Cornwell “Cottonmouth” Stokes (Mahershala Ali).

Marvel’s Luke Cage doesn’t reinvent the wheel when it comes to revenge stories or even superhero ones – in fact, much to my surprise the series just seems to revisit those tropes beat-by-beat. Not the best start to a review, right? But what the series lacks in overall original plot, it by far makes up for with a fantastic injection of great music, tremendous performances from the impressive cast, and colorful characters set in a very unique and very adult corner of the MCU.

Marvel’s Luke Cage is like if Quentin Tarantino remade Boardwalk Empire and set it in modern times with an all African-American cast over thirteen hours – oh, and a nearly invulnerable superhero in the center. Although much to showrunner Cheo Hodari Coker’s credit, Luke’s powers are almost an after-thought for most of the first seven episodes – Luke is a real person first and foremost, and the men and women around him are as well.

Colter continues to grow in the role of Luke Cage and is given much meatier material to work this time out and really impressed me his range –  at times in Marvel’s Jessica Jones he felt a bit like a super-buff, incredibly handsome guy that was only there for that reason alone, but Marvel’s Luke Cage easily dismisses that notion and solidifies the role as truly owned by Colter.

But Colter isn’t the best thing about the series – no, that role belongs to Mahersala Ali’s riveting portrayal of the fascinatingly complex character Cornwell “Cottonmouth” Stokes. Ali is effortlessly cool and charismatic as the also chillingly intimidating owner of the Harlem’s Paradise nightclub and cousin to councilwoman Mariah Dillard (Alfre Woodard). The two form a family power-couple of strength and influence above in legitimate politics and below in the criminal underworld, but these characters are beautifully written and flawlessly performed to avoid painting them as straight forward villains.

Harlem’s Paradise is one of the key location of the show (along with Pop’s Barbershop) while providing much of the fantastic blending of black music from different eras. Coker many times uses an artist’s performance in the club that is cut with action going on elsewhere to great effect. But then there’s just the slightly more simple and the flat-out awesome use of music like the Wu-Tang Clan playing over Luke Cage giving some bad guys a major ass-whuppin.

The supporting cast is also tremendous and features Detective Misty Knight (Simone Missick), a good cop who gets entangled with Harlem’s Paradise, that leads her to cross paths with Luke Cage – a man who she is attracted to, but also seems somehow connected to the ongoing gang war. Missick is great in the role and manages to be a strong, endearing female that feels every bit like she can hold her own with any of the men in Harlem.

Knight’s sarcastic and somewhat disillusioned, but still lovable, partner Detective Rafael Scarfe is also played brilliantly by the scene-stealing Frank Whaley. Missick and Whaley have great chemistry and they’re partnership ends up being a key relationship in the early episodes. Sons of Anarchy star Theo Rossi is also quite good in small doses as the calm and collected “Shades” Alvarez, tasked with micro-managing Cottonmouth by his boss.

In a time of escalating racial tensions in our nation it should be noted that since Marvel’s Luke Cage is intended only for adults, the series makes copious use of the racial “N-word” slur throughout. But always in the center is Luke Cage, who makes it clear that using that word is not okay for anyone to use, regardless of color. Luke has such a great sense of morals on the show and is truly a beacon for anyone, no matter their skin color, to look up to and appreciate.

Marvel’s Luke Cage is overflowing with terrific personality and culture, while also providing enough of the “holy shit” moments we’ve all come to love from Marvel’s Netflix. While much of the plot structure is a revenge story cliché, Cheo Hodari Coker’s vision for the series still plays out as a wonderful mash-up homage to the original “blaxploitation” Luke Cage comics in a modern, moving setting with a solid message for today.

While the story will sometimes feel like a predictable throwback revenge plot, the series is still another a big win for Marvel and Netflix as the incredible cast paired with the culture and music that showrunner Cheo Hodari Coker injected into the production brings the character and the Harlem world to vibrant life.