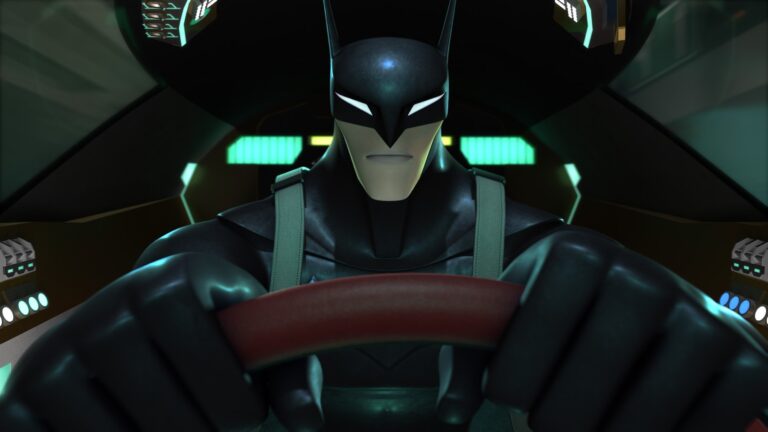 As with The WB’s The Batman animated series that ran from 2004-2008 we’re dealing with a Bruce Wayne/Batman that is very early in his career. Anthony Ruivivar does a pretty decent Batman voice and invokes a little bit of a younger Kevin Conroy feel, but his Bruce Wayne is nowhere near as good. He’s joined by J.B. Blanc as an Alfred Pennyworth unlike any Alfred we’ve seen previously in animated form. This one is more akin to Geoff Johns’ ex-military Alfred (MI:6 in this version) from the graphic novel Batman: Earth One where his role is more active in training Bruce, and he can even get involved in the action if need be, even though he is beginning to age. But the arrival of the episode’s villains and another obscure DC hero seems to hint at an over arching story and that’s an exciting choice.

In the show’s defense, the character designs are all pretty neat for the most part. Batman is sleek and almost all black save his belt and has a raised Bat-symbol on his chest. Professor Pyg looks like something from a slasher horror film nightmare and his cockney accent certainly fits the look of the villain. Briefly we get a glimpse of Lt. James Gordon (voiced by Kurtwood Smith) and he’s very true to the common styles, complete with mustache and glasses. My lone complaint would be the design of Alfred, who is a suit wearing well-built guy with a shaved head that far too many times looks more like Lex Luthor than any of the versions of Alfred we all know and love, including Geoff Johns’ Earth One version.

The wacky Grant Morrison style of the villains. The bravado to do something completely new with Batman. The action scenes. Most of the character designs.

The animation style takes some getting used to. Villains are under developed. Some of the scene designs look just bad. Sometimes a bit too oddball for it’s own good.

A welcome and refreshingly new take on The Caped Crusader that, aside from the sometimes off-putting CG animation, brings some much needed gusto back to Cartoon Network’s DC Nation animation block.

Comic-Con 2017: Greg Cipes on Beast Boy in ‘The Night Begins to Shine’ Event