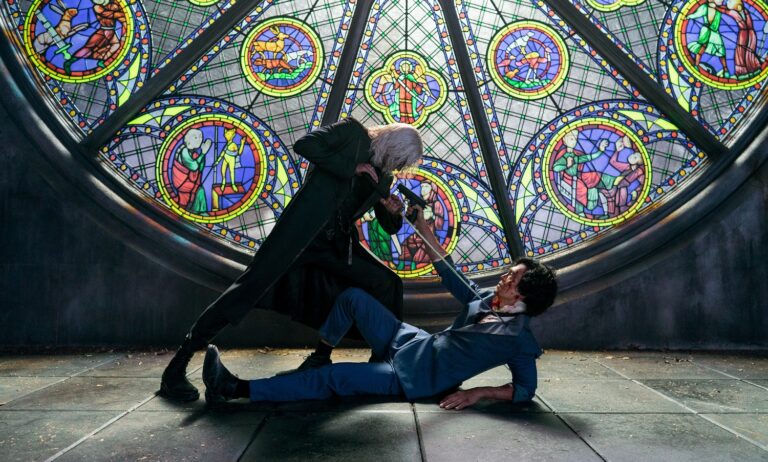 Bounty hunters, spaceships, and a kick-ass soundtrack. No, The Mandalorian isn’t back yet, but Netflix’s live-action adaptation of the beloved anime is here with the release of the first season of Cowboy Bebop. The ragtag team of “cowboys” for hire — Spike Spiegel (John Cho), Jet Black (Mustafa Shakir), and Faye Valentine (Daniella Pineda) — are brought to vivid live-action life in this colorful and stylishly unique space Western.

Cowboy Bebop works for both newbies and long-term fans alike, with the latter definitely getting great satisfaction from the numerous Easter eggs and the meticulous recreation of the characters and storylines from the original anime. Non-anime fans will just find themselves immersed in a wild new universe like The Fifth Element and Firefly all swirled up. Netflix’s adaptation even brings back original director Shinichirō Watanabe as a consultant on the series, and original composer Yoko Kanno, with the music once again being an especially huge part of the show’s personality.

This live-action series wouldn’t even be able to make it out of the space dock if it didn’t nail the main trio, which wasn’t a problem with the inspired casting. Cho clearly took great strides to nail the cadence, posture and fighting styles of Spike, but also interjects a little more humor and personality into his version of the show’s lead character. Shakir’s Jet is the heart of the series and his performance is perhaps the best translation from the original medium. His muscle bound bounty hunter with a heart of gold has terrific chemistry with Cho, making Spike and Jet a blast of a buddy cop pairing.

The biggest character overhaul for the Netflix series is clearly Pineda’s take on Faye. Much of Faye in the original series was stereotypical anime fetishization with some incredibly dark turns near the end of the series. It goes without saying that trying to stay faithful to that would be problematic, so Pineda’s Faye is quippy, industrious and every bit the bounty hunter match for Jet and Spike while also having no problem getting into humorous verbal tussles with the boys.

The action is snappily choreographed with some very slick hand-to-hand combat and bloody gun play. As mentioned above, Cho and his stunt double do the heavy fight lifting, but everybody gets to have cool sequences. The Bebop, Swordfish and all the other vehicles look absolutely terrific, which unfortunately is a shame there weren’t more dog fights or space related action.

Tonally, the show struggles throughout the ten episodes of the first season. The original series is very hard to adapt and also shifted tones often, making the translation to live action very difficult, especially when a series like this follows very specific episode arcs faithfully. Cowboy Bebop‘s main villain Vicious (Alex Hassell) is a good example of the show struggling to find the right balance between grounded and goofy.

Vicious is also a prime example of the show making changes from the anime that don’t improve upon what came before and bring down the enjoyment factor even for those who haven’t seen the source material. Hassell’s Vicious varies from chewing-the-scenery to chillingly calm and it varies scene by scene, episode by episode. The character, who originally was intended as a looming threat, is front and center in almost every episode with a tiring, drawn out backstory featuring the mysterious Julia (Elena Satine). Both characters are visually well represented, but suffer from stretched out B-plots to expand the characters. Thankfully, Hassell is good with a katana blade when not speaking.

But rest assured fans, everyone’s favorite corgi Ein is brought to adorable live-action life with a few twists and changes to his backstory to keep the faithful guessing. The music, nostalgia and spirit of Cowboy Bebop are all here, while still crafting something new and exciting that will hopefully continue to grow beyond the initial ten episodes. See you next season space cowboy?