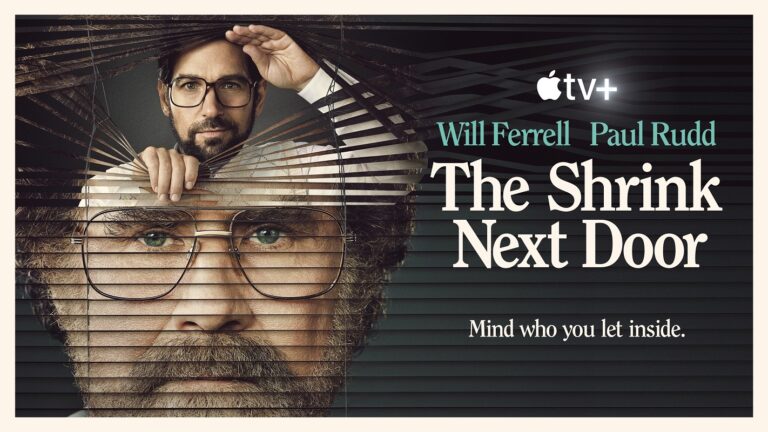 Inspired by a bizarre true story, The Shrink Next Door sees normally lovable comedic actors Paul Rudd and Will Ferrell taking a rare foray into darkly dramatic territory for this eight-episode limited series from Apple TV+.

Based on the podcast of the same name, The Shrink Next Door catalogs multiple decades of the manipulation and insecurity of Martin “Marty” Markowitz (Will Ferrell) by his longtime, status obsessed psychiatrist Dr. Isaac “Ike” Herschkopf (Paul Rudd). While at first Marty’s headstrong sister Phyllis (Kathryn Hahn) encourages him to seek the psychiatric help, she’s the only one that begins sees through Dr. Ike and his unwitting wife Bonnie’s (Casey Wilson) slow, cancerous takeover of Marty’s life.

Calling this limited series a dark comedy is being pretty generous: The Shrink Next Door is a sad, slow-burn car wreck that showcases fantastic performances from all the lead actors, but is nearly devoid of any genuine laughs. That doesn’t mean the series isn’t any good, but it would be wise to temper expectations about what this usually funny cast brings to the table here. This is the type of series that when it’s finished, viewers will appreciate it for the performances and nuance, but won’t put themselves through another painful visit through the events of the series.

Ferrell is astounding in the role of Marty, bringing to life the emotional journey the character takes through the decades while turning in what could be the best performance of the SNL alum’s acting career. Rudd is a little more in his comfort zone as Dr. Ike, being able to rely on his natural charm and likability as the exploitative psychiatrist, but he really shines when the subtle choices the Ant-Man actor makes revealing the jealousy he has of Marty’s wealth alongside his own constant need to be seen and photographed with important people.

The script from Georgia Pritchett (Succession) is full of those small moments that slowly pay off throughout the multi-decade events. If you’re unfamiliar with the story the series adapts, this version makes it very difficult to figure out who is in the right for quite a few episodes. Much like Marty, the viewer becomes endeared to Dr. Ike and begins to root for their growing friendship while the treatment truly seems to work for Marty. Unfortunately, this means turning the blame on his sister Phyllis, and Hahn’s performance is convincing and focused while also generating most of the consistent minor humor moments. But Hahn’s performance is even better in hindsight once both Marty and the audience begin to realize that lines between patient and client have indeed been irreparably crossed and Phyllis was right all along.

Don’t be surprised if a few of the cast members from this series get Emmy nominations, Ferrell being the standout, but everyone in this is worthy of consideration. The Shrink Next Door won’t leave you smiling at the end, but the story is fascinating, sad and no matter how uncomfortable it might make the viewer, you can’t look away.

The first three episodes The Shrink Next Door limited series will premiere globally on Apple TV+ on Friday, November 12, followed by one new episode weekly, every Friday thereafter.