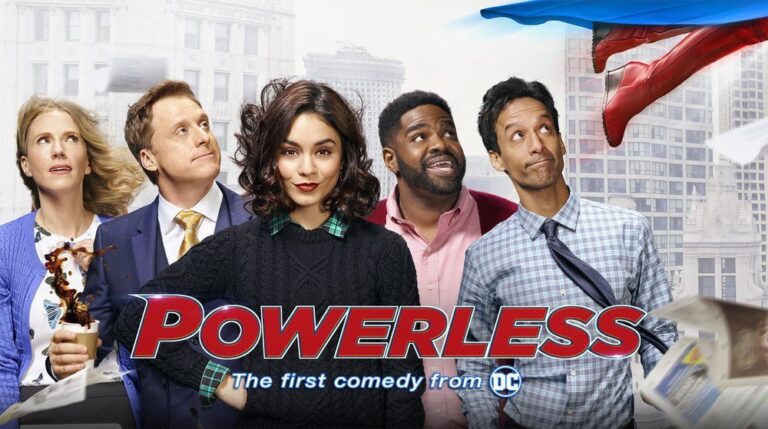 NBC’s Powerless is the first of its kind in this new pop culture world of superhero mania – the series is a half-hour comedy from Warner Bros TV set in the DC Comics universe about a team inside Wayne Enterprises (yes, THAT Wayne Enterprises) that specializes in developing technology to protect the common person from becoming victims during escalating superhero battles across major cities.

The series stars Vanessa Hudgens (Spring Breakers) as Emily Locke, a small town girl both cheery and optimistic that is hired to become Director of Research & Development for Wayne Security, a subsidiary of Wayne Enterprises. When she arrives in Charm City to start her job, she finds herself working for Van Wayne (Alan Tudyk), the aimless cousin of Bruce Wayne (aka Batman, shh!) that uses the family name recognition and wealth to drift within the company in hopes of getting to eventually work in the main Gotham City office.

When Emilly arrives in the office she finds out her team is an eccentric group that has become apathetic to their cause of helping people after having been beaten down in the office with bad management and corporate B.S. Community‘s Danny Pudi stars as Teddy, the pseudo voice of the team before Emily arrives, along with Ron Funches as Ron the excitable and enthusiastic IT guy of the group, and Jenni Pierson as Wendy, a talented inventor who has zero f*cks to give about her new boss Emily.

Powerless is a lot of fun for any fan of the DC Universe of characters, running with its unique comedic take on the life in that world, with inside DC references aplenty for the casual fan and as some laugh-out-loud moments for the hardcore ones. Although the show doesn’t totally rely on anyone being a comic book geek to enjoy, it certainly helps with the smorgasbord of inside gags and Easter eggs. One early scene involving a certain classic DC Silver Age super villain outside Emily’s apartment window almost made me spit out my drink, and even the opening credits are a gorgeous thing of DC Comics beauty.

When taken as a more straightforward comedy, the pilot doesn’t quite have enough of the Joker toxin-style really big laughs (there are some!), but does provide its share of solid chuckles throughout. Hudgens is charming and enthusiastic as Locke and Tudyk’s comedic timing is still the best in the biz and their rivalry is what really makes Powerless work. It’s extremely fun to see the two characters continually one-up each other to accomplish their drastically different goals and having Tudyk on the show vastly elevates the material.

Emily’s supporting team is also full of talented actors and actresses, but the pilot feels like it hasn’t quite figured out how to use all of them just yet. Hopefully with a few more episodes, the supporting cast can get fleshed out and provide some bigger comedic moments and let the talent shine in their roles.

One writer’s note that I should mention is that this version of the Powerless Pilot is NOT the version that was shown to audiences and critics last year at Comic-Con. The newer version is a complete rehauling of about 98% of the episode with a distinct tonal shift. The original had a more grounded office comedy vibe, still set in the DC Universe, but with more real life versions of its main characters and a couple that didn’t even make it into this update that will air on NBC. Perhaps those characters will show up down the road? This is a DC show, so perhaps they can have a “Crisis” event and bring the old and new versions of the characters together? Just a DC nerd dreaming over here.

But this version of Powerless is a more heightened comedic version of the show, going with more high energy characters and laughs with situations that are more slapstick than the subtle office humor of the old version. They also injected more DC references into it, including changing Alan Tudyk’s character to Van Wayne (an actual real Batman character created by Bill Finger) and dropping the RetCon insurance agency setting for Wayne Securities.

If you must ask, I do prefer the original pilot slightly more, but I do understand why NBC made the decision and I think the new version is more accessible to a broader audience. My hope is that the shakiness that is present within this alternate pilot is just an issue of having to cram a brand new script into a finished episode to fix the problems they saw with the old version and can now, with subsequent episodes, settle into a much more confident show.

The series' upbeat tone and tremendously talented comedic cast mixed with the extremely fun premise of being set inside of the DC Comics universe makes for a solid good time with a fair amount of legit laughs. Regular pilot problems aside, if it can continue to improve, the sky's the limit for this superhero show about non-superheroes.