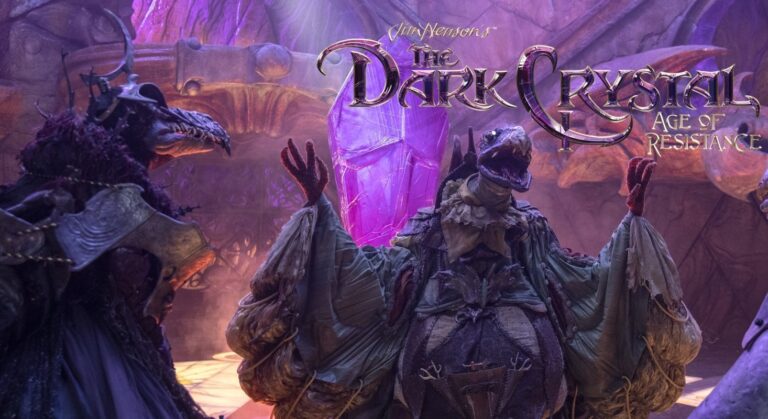 Netflix is about to fix the world’s severe lack of sweeping Jim Henson Company epics with the long-awaited prequel series The Dark Crystal: Age of Resistance. This near masterpiece of craftsmanship and pure artistry is every bit as imaginative, creepy and moving as the original and one of the best fantasy tales since the Lord of the Rings films.

The series, coming from the aforementioned Jim Henson Company and director/executive producer Louis Leterrier (The Incredibe Hulk), takes place 50 years before the events of the original 1982 film The Dark Crystal. The amazing puppetry and technical wizardry on display are just sublime and carry some of the early episodes that are overwhelming with the amount of characters, storylines and history to establish.

The Dark Crystal: Age of Resistance brings viewers to a time when multiple races of Gelfling (the elf-like protagonists) have a thriving kingdom on Thra, overseen by their beloved (but actually nefarious) overlords the Skeksis. The Stone of Truth, the heart of Thra, is damaged and corrupted by the Skeksis, causing sickness/madness throughout the lands and as the Gelfling discover the Skeksis’ true nature, a fire of resistance is lit.

Once the daunting task of setting all the pieces into place is finished, the series races forward with clever threads that add depth to events and characters from the original film while telling an even more satisfying, visually breathtaking story of awakening and revolution. Almost everything in the series feels big and well crafted, from the powerful orchestral score by Daniel Pemberton and Samuel Sim to the simple retro opening title fonts.

Despite the gorgeous and wildly imaginative creature designs, the hero Gelflings are still the creepiest looking beings in the series. Thanks to a star-studded cast turning in terrific work and top-notch puppetry, the creep-factor of the Gelflings eventually wears off and its easy to begin to care about each of them as their roles in the resistance become more defined and the stakes begin to raise. At the center of it all is Gelfiling Rian, willfully voiced by Taron Egerton, who witnesses the cruel nature of Skeksis first hand.

A few standouts in the impressively deep cast are worth mentioning here, and none more than Simon Pegg‘s incredible version of The Chamberlain. Fans will remember this devious opportunist from the original film, and Pegg is unrecognizably perfect taking over the role, becoming the most fascinating character in the series. Game of Thrones‘ Nathalie Emmanuel also brings vibrancy and light to her unintentionally corpse-looking Gelfling, Deet, with her endlessly endearing voice work. Awkafina is a riot on the other end of the spectrum as The Collector, the pus-filled, whiny Skeksis along with Mark Hamill doing what he does best in a delightfully over-the-top performance as The Scientist.

The Dark Crystal: Age of Resistance races along to its climax in the final six episodes brimming with death, betrayal, extravagant characters and jaw-dropping settings. Numerous supporting characters like the noble podling Hup or the gentle natured Mystics will steal hearts and bring smiles. While the series does add a lot of depth to the original film, it doesn’t quite line up cleanly with it, leaving behind plot threads and characters with unfinished arcs that are no doubt left open for a potential follow-up series.

It can’t be stressed enough how wonderful it is to see this form of storytelling brought back with the love and vigor that has long been the trademark of Henson puppetry. The technology advancements in special effects since the original are rarely used to overshadow what is essentially a lost art form. Come for the nostalgia and the amazing Jim Henson Company quality production and stay for what unfolds to be an emotional, wonderfully realized fantasy epic, the likes of which sadly only show up every so often. The Dark Crystal: Age of Resistance is all the creepy and awe-inspiring magic you remember from your childhood given an upgrade in almost all aspects of its storytelling and presentation.

The Dark Crystal: Age of Resistance premieres on August 30th, exclusively on Netflix.