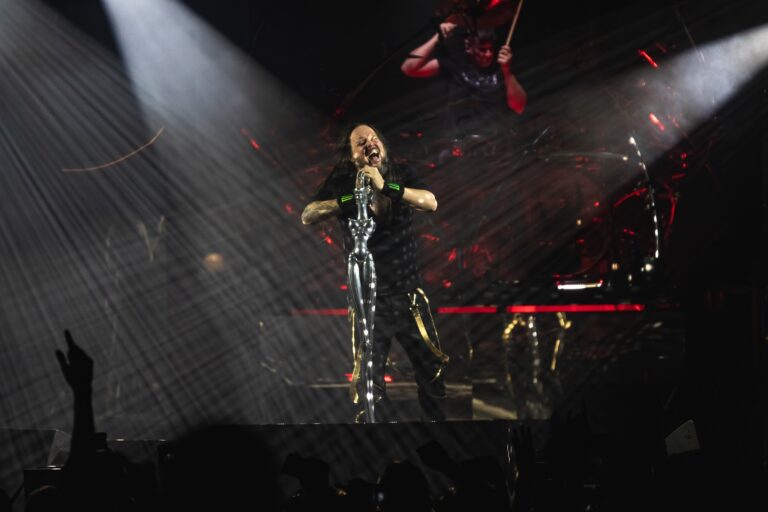 PHOENIX — Nü-metal mainstays Korn returned to the Valley of the Sun on Saturday for the first time in nearly three years, co-headlining Ak-Chin Pavilion with grunge rockers Alice in Chains. As with other recent shows at the outdoor venue, attendees were forced to endure the punishing desert heat, but based on the number of people singing along and banging their heads, it was a small price to pay.

Despite the impending release of their 13th studio album, The Nothing, Korn relied mostly on older material, with more than half the setlist comprised of selections from Issues, Follow the Leader, and their self-titled debut. Live staples “Blind” and “Freak On a Leash” were complemented by more uncommon fare like “Divine” and “4 U,” alongside the only new track, “You’ll Never Find Me.”

Frontman Jonathan Davis noted the band had recently marked their 25th anniversary, and thanked fans for their support over the past two decades and change. “You people have given us everything,” he acknowledged, and indeed rock superstardom doesn’t manifest without a dedicated legion of followers. If the raucous crowd at Ak-Chin Pavilion serves as any indication, that support will continue to carry Korn for many years to come.

Check out photos from Korn’s performance at Ak-Chin Pavilion below.

Korn heads to Chula Vista, CA tonight for another show at North Island Credit Union Amphitheatre before wrapping up the tour tomorrow evening at the Shoreline Amphitheatre in Mountain View, CA. Their newest album, The Nothing, is slated to hit record store shelves on September 13th.