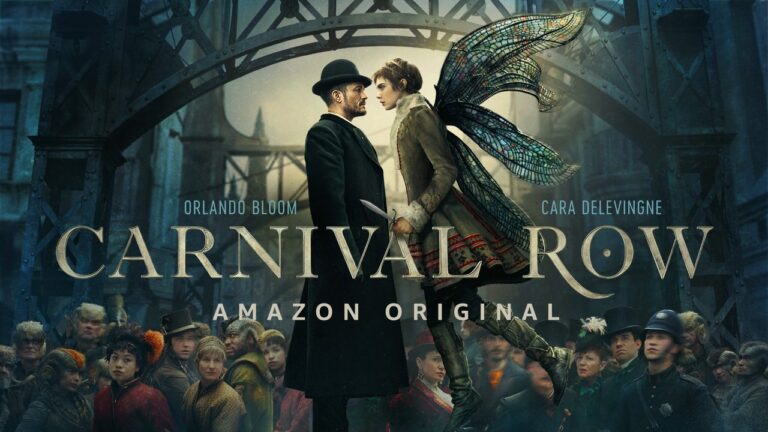 Fairy-tale creatures and Victorian detective noir come together in the stylish fantasy Amazon Original series Carnival Row. The series boasts movie stars Orlando Bloom and Cara Delevingne in the leading roles of star-crossed lovers in a war-torn world, brimming with prejudice and revolution that, despite lush visuals and intriguing settings, turns out to be rather dull and disappointing.

Human detective Rycroft Philostrate (Bloom) has a history with the recently indentured faerie Vignette Stonemoss (Delevingne) with neither knowing the current whereabouts of the other after years of separation following their involvement in the recent war between magical beings and humans. After a painful and tumultuous reunion, the two find themselves in the middle of a growing class war alongside a string of murders by a shadowy, unknown beast.

Despite not usually caring for the work of Bloom or Delevingne, the issues with Carnival Row do not fall on their shoulders — or any member of the fairly large cast. In truth, I found both to be turning in some of their more solid work while trying to really sell this show’s vision. No, the series is truly hindered by its plodding pace and forgettable supporting characters and plots, all while taking itself far too seriously for such a fanciful premise.

Many of the early secrets and plot points are far too obvious and require the viewer to wait for a reveal that is already easily deduced. The series also doesn’t hold back with its mature content in either the violence or sex, but even those fleeting moments of magical gore or fornication can’t spice up this drab tale. The main over-arcing murder mystery barely factors in until halfway through the first season, and many viewers might find they’ve already lost interest in it by the time Carnival Row actual begins to entertain — but in all fairness, it does actually improve in the final stretch of episodes.

Carnival Row isn’t an outright disaster of a series and will most likely find some sort of an audience with die-hard fans of faerie culture or the devoted Twilight supernatural romance obsessives. The sheer scope of the world created, the many species and subcultures within and how they fit into the human world are also interesting and impressively crafted — but what good is a beautiful instrument if you don’t play it well?

I can’t help but wonder what might have been, knowing that Carnival Row originally was optioned as a movie script from showrunner René Echevarria that Guillermo del Toro was lined up to direct in the late 2000s. The show’s narrative certainly feels like a plot that is stretched too thin and derived from a story intended to be shorter and packing a bigger punch. Despite huge potential, Carnival Row mostly teases the audience with good ideas, essentially taking the excitement out of this promising and rich fantasy world.