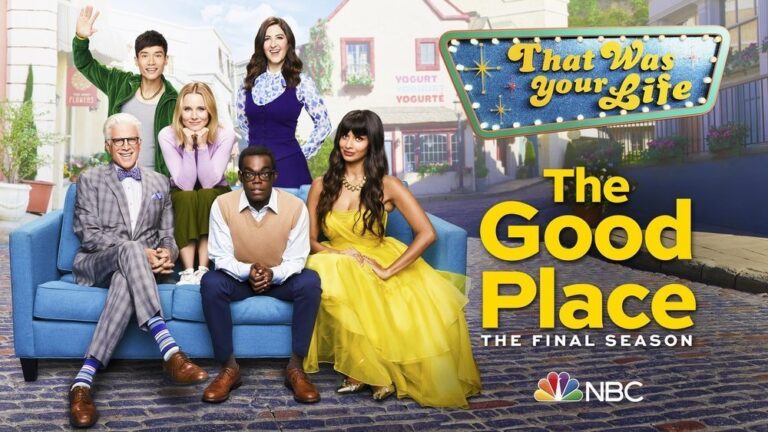 Pull out your moral philosophy books one last time because The Good Place is forkin’ back for its fourth and final season on NBC. The peacock network earned their halos by providing us with the first four episodes of the critical darling comedy’s last run and they’re jam-packed with all the creativity, wit and heart that have made the series a beloved fan favorite.

After the heartbreaking status quo reversal of the Season 3 finale, we find Eleanor (Kristen Bell), Michael (Ted Danson), Janet (D’Arcy Carden), Tahani (Jameela Jamil) and Jason (Manny Jacinto) struggling to find the right balance for their “new normal” in the new neighborhood. As much as I’d love to spill the beans over what transpires over the course of these episodes, I will refrain from spoilers to save the experience for the show’s fans and only convey my overall impressions, which are powerfully positive.

The Good Place‘s return, titled “A Girl from Arizona, Part One,” doesn’t spend long wallowing on the gut-punch ending from Season 3 and instead moves forward with its trademark quirky wit and all of the characters are on point and portrayed beautifully by their actors. The two-part premiere even introduces some wonderfully offbeat new characters that generate some big laughs and hilariously spot-on society archetype foils.

Never one to rest on their laurels, the series once again continues to reinvent itself, and each of the remaining final episodes are ripe with well timed twists and betrayals. As much as I love the bite-sized half hour format of the show, I wish these last installments could have been embiggened to a full hour. The wait audiences will have in between these episodes will be brutal, but at least there’s plenty to digest and dissect in each chapter to tide the time.

These four episodes also excel at balancing the large supernatural and moral ideas with some very well executed, smaller moments of relationship growth — both romantic and otherwise. Kristen Bell is particularly strong early and both Ted Danson and D’Arcy Carden also get some meaty material to work with inside their interpersonal character’s entanglements. Manny Jacinto also deserves praise for continually bringing the accessible funny, while shouldering the role of the big lovable heart of the The Good Place Scooby gang.

The pace of The Good Place‘s swan song is overwhelming, but the episodes are packed so dense with jokes, visuals and character evolution it will be worth it to savor each episode with multiple viewings between the devastating week-long breaks. The Good Place has had my heart and mind since the very first episode and the show’s final season is starting out as forkin’ good as one could ask from this sweetly reflective, one of kind series about a girl from Arizona.

The Good Place returns for its final season on September 26 at 9 p.m. ET. on NBC.