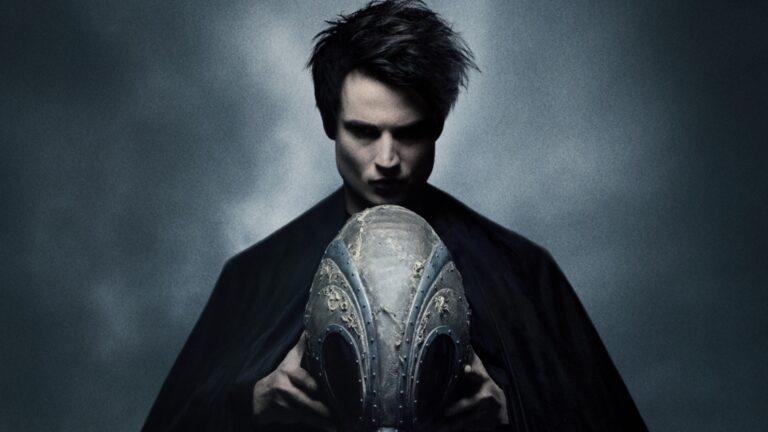 Dream the world anew. Neil Gaiman’s seminal fantasy opus The Sandman finally gets a live-action incarnation thanks to Netflix. The ten episode first season adapts the first two volumes of the graphic novel into a visual feast brought to life (or dreams) with an excellent ensemble cast in a moderately successful attempt to realize the enormity of the difficult-to-adapt source material.

Tom Sturridge stars as Morpheus/Dream, the king of dreams and ruler of The Dreaming, a dream world of his own creation. A magical spell gone wrong by a charlatan occultist finds Dream trapped for over a century as the “real world” is afflicted with cases of never-ending sleep and loss of dreams themselves. Upon escape, Dream must gather his strength and right the wrongs of his absence.

First off, The Sandman doesn’t work if you don’t hit the arduous task of casting Dream just right, and Sturridge steps in as if he was Dream himself. His appearance is well adapted for the series, including his live-action translation of the iconic unkempt hair into a believable real life facsimile. Sturridges’s otherworldly cadence and piercing eyes give him an appropriately creepy aura, presenting Dream as clearly inhuman despite his physical form. There are even a few camera tricks applied throughout the series, such as vertically stretched shots, to make things like his imprisoned and nude physical form seem alien-like right from the beginning.

But I think it’s important to make it clear if you are looking for a faithful in every way adaptation, The Sandman purists are going to be disappointed. The Netflix series trims much of the fat of the source material and makes numerous gender and ethnicity changes to core characters. Most work quite well in my opinion, but there’s already been backlash over certain character changes, even before the series has been released.

Since The Sandman is a DC/Vertigo Comics property, one such update involves DC Comic’s John Constantine, a character with a memorable arc in the series, being gender-swapped into Johanna Constantine, played by Doctor Who‘s Jenna Coleman. Johanna is essentially John in every way, even down to the petty dabbler of the dark arts’ sad history with the young girl Astra. Johanna also sports a sleek, more fashionable version of the trademark trench coat. Coleman works in the role and provides an interesting dynamic change with Dream as Johanna, so I don’t hate the choice. Bringing John into the series would have brought a lot of baggage, whether they used the Arrow-verse’s Matt Ryan to reprise the role or cast someone new. But for some fans, it’s a legit gripe not to see the original version of their favorite character interact with Dream like originally intended.

On that note, don’t expect any of the DC Comics tangent stories that were part of the source material either. No Martian Manhunter. No Swamp Thing. In fact, if you expect nothing from the graphic novels to show up, your experience will be better for it. Gaiman himself has said publicly that the series is tailored for those who have no prior experience with this world before viewing. That doesn’t mean there isn’t much here to enjoy for fans — so much is still intact and wonderful — but having the expectations of seeing your favorite elements transition from page to screen will not end well.

What the series does do, however, is an excellent job weaving vivid characters in and out of the narrative. Gwendoline Christie (Game of Thrones) is exquisite as Lucifer, embodying the grace, beauty and evil of the fallen angel. There’s an excellent confrontation with Morpheus in the first half of the season that employs a terrific approach in how the two of them fight in a duel. But sorry Lucifer fans, Tom Ellis is not reprising his role from the network television series either, despite Gaiman’s involvement in that network series. Asim Chaudhry as Abel and Sanjeev Bhaskar as Cain, based on the biblical brothers, are also rather delightful as darkly comedic side characters alongside their adorable CG gargoyles.

As mentioned before, the series is split into two arcs, with the first half wrapping up the adaptation of Vol. 1: Preludes and Nocturnes. The early episodes featuring Dream’s imprisonment at the hands of the occultist Sir Roderick Burgess, played perfectly by Charles Dance (Game of Thrones), are easily the most faithful and well executed of the lot. The first five are a very dark string that eventually see David Thewlis (Harry Potter and the Prisoner of Azkaban) take a nasty turn as John Dee. Things go to some daaaark places before the big finish, which almost feels like a season finale. From there, the season takes some time to take a few breaths and explore Dream’s family, the Endless, before diving into Vol. 2: The Dollhouse. This is a much shakier arc that feels akin to the worst episodes of American Gods, despite giving better material to supporting characters like Dream’s assistant Lucienne, played with abundant charm by Vivienne Acheampong.

The other character getting a boost in later episodes is Boyd Holbrook as The Corinthian, an occularly abnormal, rogue creation of Dream and the over-arching villain of the first season. Holbrook is good fun as the mischievous murderer and gives a vibe that could have been at home on the underrated series Preacher. The dream vortex herself, Rose Walker (Kyo Ra), is introduced and drives the story of the season’s latter half as she searches for her brother. Ra is very endearing as the character, but something about these episodes just feels off, especially when compared with the tone of the first half. The look and feel of it all is an odd tonal shift to a more brightly lit, by-the-numbers fantasy series, despite a few moments of darkness.

Many other fantastic beasts and creatures fill out the cast, including the always reliable Patton Oswalt doing his regular thing as Matthew the Raven. Kirby Howell-Baptiste is wonderfully warm and sweet as Death in an introspective, one-off episode to kick-start the second arc. My personal favorite is Mark Hamill as Mervyn Pumpkinhead, the chain smoking janitor of The Dreaming with — you guessed it — a jack-o’-lantern head.

The Sandman is a drop-dead gorgeous fantasy with production values through the roof. The cast of characters are diverse and beautifully portrayed within this moderately successful adaptation. Graphic novel purists need not apply, as this probably isn’t for you. But for those looking for a journey into strange and wonderful new realms, brought to life with love and care, The Sandman is a worthy adventure into dreams.