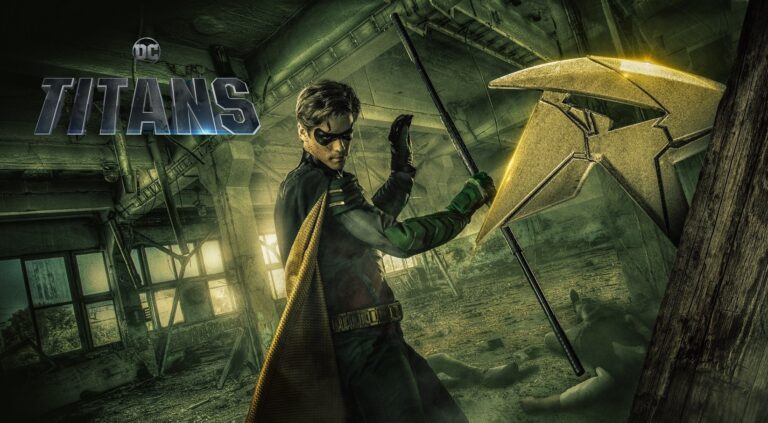 The DC Universe streaming service gets a huge boost of adrenaline this week with the release of its flagship live action original series Titans. The series brings to the life the titular superhero team probably best known for a pair of kid-friendly animated series, but Titans is 100% for mature audiences only.

Warner Bros TV was kind enough to give us a look at the first handful of episodes that will be released weekly beginning on October 12th, and DC is coming out swinging with a solid first original series. Titans takes its time introducing each team member and eventually bringing them all together with the early episodes focusing heavily on Robin/Dick Grayson (Brenton Thwaites) and Raven/Rachel (Teagan Croft) being thrown together when her adoptive mom is murdered.

Thankfully that isn’t a bad thing and Thwaites is easily the breakout star of the series, anchoring the show with a brooding yet still likable version of the beloved former Batman sidekick. Besides turning in a great performance, fans will flip at the insanely cool and bloody sequences where Dick dons the “R” again, earning an R-rating while demolishing unsuspecting thugs and villains.

The story continues to unroll with Raven at the center and the tone remains extremely gritty, mature and full of foul language throughout. She becomes the thread that brings other characters like Starfire/Kori (Anna Diop) and Garth/Beast Boy into the fray. Any concerns about the look of the show should also be squashed because it generally looks very cinematic and the character designs work way better in context than expected.

Titans does have its fair share of growing pains that are evident and sully what is in many ways an overachieving series. There are numerous odd songs choices that sometimes don’t match the mood of the scene and at others change the tone to an angsty teen drama that should be on a cheesy cable network.The constant F-bombs and ridiculously over the top violence and adult themes can also at times portray a sense of trying too hard to be cool and edgy.

Also disappointing thus far is how Starfire is portrayed as a female badass with little to no empathy, instead of the endlessly positive and sweet version of the character most fans will be familiar with. That’s no slight on Diop, who is fine in the role and looks pretty great as the character, but it feels like a little hope and optimism is missing in the series. On the other hand, the character of Hawk (Alan Ritchson) turns out to be a surly, gruff badass surprise that steals nearly every scene.

Staying on the positive side of things, it is absolutely fantastic from a fan perspective that Titans takes place in a fully lived-in DC Universe. All the big heroes and villains are out there somewhere and well into their respective careers and Titans doesn’t feel like it has the creative catalog handicap like on The CW’s Arrow-verse DC shows, where they can’t even mention Batman.

If the early episodes of Titans are any indication of the overall quality of the series, the DC Universe streaming service is off to a pretty good start. The show is just wild and risky enough with a surprisingly great cast to be any fans next superhero TV obsession.

The first handful of episodes are cinematic and extremely mature in nature creating a unique experience set in a lived-in DC Comics world. It's rough around the edges but just crazy enough to be your next DC superhero series of choice.