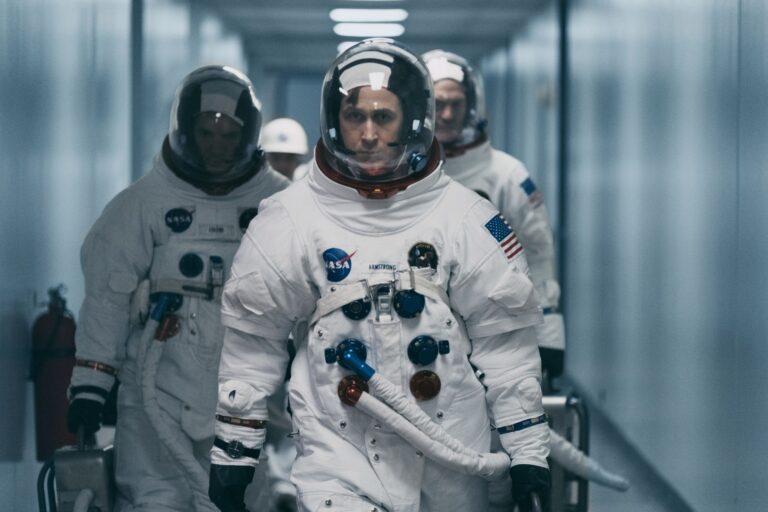 From the opening moments of First Man, it’s clear that director Damien Chazelle has set out to depict space travel in a way heretofore unseen on the big screen, eschewing an omniscient perspective in favor of placing the audience inside the cramped cockpit of an X-15 alongside its pilot, a young Neil Armstrong (Ryan Gosling). As the vehicle breaks through the clouds and slips above the atmosphere, we see exactly what Armstrong sees, a sliver of beauty and wonder that we can barely appreciate before the craft begins spinning out of control.

This harrowing sequence is all the more panic-inducing thanks to the sense of claustrophobia brought on by Chazelle’s adherence to Armstrong’s POV: as he plummets back toward the Earth and struggles to regain control, we catch fleeting glimpses of dials and gauges on the instrument panel, and hear snatches of static-laced communications through his headset. When Armstrong is forced to eject, the camera stays with him, the spectacle of the crash barely noticeable in the background – the destruction of a valuable piece of NASA equipment is of little interest to Chazelle, who cares far more about the effect this event will have on Armstrong, and how he’ll choose to deal with it.

These first thrilling minutes set the stage for the film to come, as Chazelle uses handheld cameras, extreme close-ups and numerous POV shots to paint a fascinatingly intimate portrait of an icon who, by all accounts, never wished to be regarded as such. When Armstrong applies for entry into the Gemini program, it’s not for glory, but because he believes himself to possess the qualities and skills necessary to be successful. It’s not ambition that drives him, nor a desire for fame and adulation, but a sense of duty. Gosling plays Armstrong as stoic and reserved, a man fiercely dedicated to the job he’s been asked to accomplish – so dedicated, in fact, that it often threatens to unravel his relationship with his wife, Janet (Claire Foy, ferocious as the film’s emotional center), and their children.

First Man spans nearly a decade in Armstrong’s life, offering a wholly engrossing account of the most famous period in NASA’s history, experienced through the eyes of someone whose life often feels like a rollercoaster of triumph and tragedy. An impressive ensemble of character actors are introduced to breathe life into numerous key figures, including Jason Clarke as Ed White, a fellow astronaut and one of Armstrong’s closest friends, Kyle Chandler as Deke Slayton, NASA’s Director of Flight Operations, and Corey Stoll as Buzz Aldrin, portrayed here as possessing an almost comical ability to utter the most indelicate musings at the worst possible moment, such as during a memorial service for a fallen comrade.

Far removed from the bright colors and slick camera movements of La La Land, Chazelle and cinematographer Linus Sandgren utilize a variety of formats to recreate the NASA of the 1960s. The space travel sequences, framed almost exclusively inside cockpits or through the eyes of Armstrong himself, are shot in grainy 16mm, while the domestic scenes at home with the families and the various meeting rooms and command centers at NASA are captured in 35mm. As for the climactic moon landing, the filmmakers employed IMAX 70mm to give the finale a grand, otherworldly feel, a technique that works to spectacular effect. Don’t be discouraged by the film’s muted color palette, because there’s plenty of beauty in First Man‘s gritty visuals.

Of course, we all know what the film is building toward, and while more screen time may have been given to the Gemini 8 mission, which found Armstrong successfully completing an in-orbit docking test before a series of mishaps and malfunctions nearly led to his demise – another distressing sequence certain to have audiences gripping their armrest and holding their breath – the Apollo 11 moon landing is nothing short of awe-inspiring. Watching Armstrong descend the ladder and gingerly step into the unknown is a stirringly cinematic moment, and his observation about the magnitude of that step – a quote we’ve all heard countless times before – feels especially profound after witnessing the sacrifices that led to such a monumental achievement.