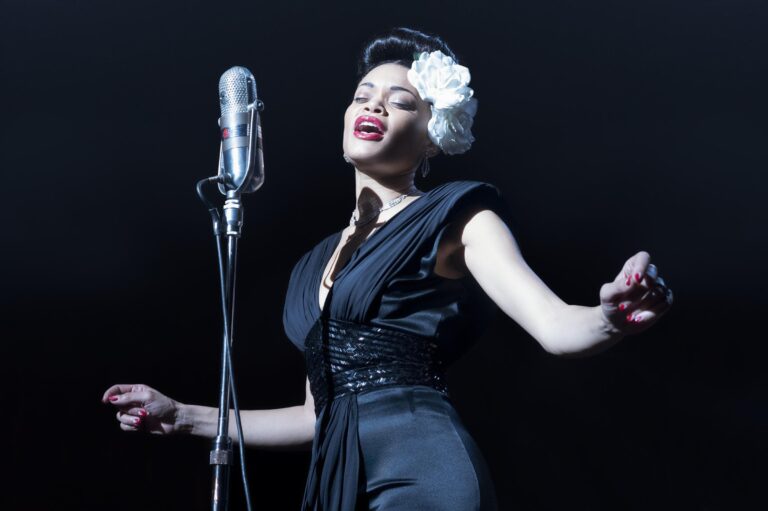 Arriving hot on the heels of Shaka King’s stellar Judas and the Black Messiah, which chronicles the FBI’s plot to take down Black Panther leader Fred Hampton, Lee Daniels’ messy, bloated biopic The United States vs. Billie Holiday offers another window into the racist policies espoused by J. Edgar Hoover and his underlings. This time, the man pulling the strings at the behest of Hoover and high-powered government operatives like Joseph McCarthy and Roy Cohn is Harry J. Anslinger (Garrett Hedlund), head of the Federal Bureau of Narcotics, and his target isn’t a political leader: it’s jazz singer Billie Holiday (Andra Day).

It seems one of Holiday’s signature tunes — “Strange Fruit,” a haunting ballad about the lynching of Black people by Southern whites — is ruffling the wrong feathers in Washington. As Lady Day relates to an interviewer, “they just want me to shut up,” but compliance isn’t in her nature, even when Anslinger’s men start showing up at her concerts and standing at the back of the room, silently threatening her to step out of line. Of course, the government can’t charge her with a crime for singing — but Anslinger is well-informed about Holiday’s history of addiction, and vows to “go after the bitch on the drugs.” His secret weapon is Jimmy Fletcher (Trevante Rhodes), one of the bureau’s few Black agents, posing as a writer to earn Holiday’s trust before turning up during a heroin binge to arrest her for possession.

Based largely on an excerpt from Johann Hari’s book Chasing The Scream: The First and Last Days of the War on Drugs — which posits that Fletcher not only grappled with immense guilt over his involvement in Holiday’s incarceration, but that he ultimately fell in love with her — the screenplay by Lori Suzan Parks goes a step further, suggesting that Fletcher would eventually become the jazz legend’s lover, a theory for which little evidence seems to exist. There’s chemistry between Day and Rhodes, to be sure, but the onscreen romance is the least interesting element of Daniels’ film, especially when it feels like so much about Holiday herself has been left unexplored.

The United States vs. Billie Holiday marks the first starring role for Day, and the Grammy-nominated singer does a spectacular job emulating Holiday’s signature vocals. The musical numbers — of which there are many — are the clear highlight of the film, even when marred by Daniels’ bewildering editing choices. But Day’s performance is equally magnetic offstage, conveying the singer’s affection toward her closest confidants (portrayed winningly by Da’Vine Joy Randolph and Miss Lawrence), the ever-present fear and frustration at her ongoing harassment by Anslinger’s agents, and the lifetime of torment that repeatedly drove her back into the throes of addiction.

It’s truly great work, but it belongs in a better film, one that has a distinct point of view rather than a patchwork of half-baked ideas and a stylistic approach that amounts to throwing everything at the wall and hoping something sticks. The United States vs. Billie Holiday is commendable for shining a light on the institutional racism that exacerbated her struggles, but it lacks the depth that an icon like Holiday deserves.