Movie Review: ‘I Care a Lot’ 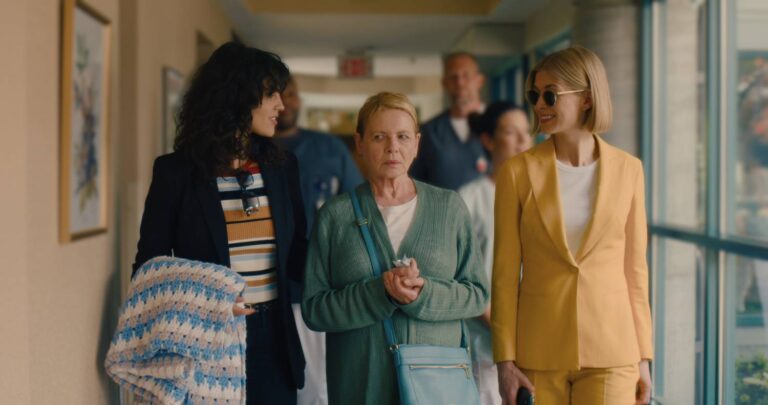 “There’s no such thing as good people,” says Marla Grayson (Rosamund Pike) in the opening moments of J Blakeson’s wickedly funny black comedy, I Care a Lot. As a professional court-appointed guardian who whisks her elderly wards off to care facilities and then profits from the sale of their assets — with a little help from her girlfriend and business partner Fran (Eiza Gonzalez), a crooked doctor (Alicia Witt) and a slimy nursing home administrator (Damian Young) — Marla sees herself as ambitious, an opportunist, “a fucking lioness” in a world where the deck is always stacked in someone else’s favor. “Playing fair is a joke invented by rich people to keep the rest of us poor,” she says, and Marla has been poor before — it doesn’t agree with her.

When the doc tips Marla off about promising new patient Jennifer Peterson (Dianne Wiest) — a wealthy retiree with no immediate or extended family to get in the way — Marla springs into action, dialing up the charm in front of a sympathetic judge (Isiah Whitlock Jr) and walking out with a court order putting her in control of Jennifer’s life. Soon, Jennifer is being welcomed as the newest resident of Berkshire Oaks Senior Living, and Marla is auctioning off her latest victim’s possessions and putting her house on the market. Jennifer’s safe deposit box yields an even bigger windfall: a cloth bag full of diamonds, mysteriously absent from the insurance form. Marla and Fran have finally hit the jackpot.

Or so it seems, until a smooth-talking lawyer (Chris Messina) shows up in Marla’s office with a suitcase full of cash to negotiate Jennifer’s release. When money doesn’t get the job done, he moves on to thinly veiled warnings of physical violence, but Marla isn’t the type to be easily intimidated: “Do you know how many times I’ve been threatened by a man?” Of course, Marla has never crossed paths with anyone quite like Roman Lunyov (Peter Dinklage), the crime boss responsible for the attempted bribery. It seems Roman has a particular fondness for Jennifer, and doesn’t take kindly to her being shuffled away to a nursing home. Oh, and those diamonds stashed in her safe deposit box? They’re his, and he wants them back.

I Care a Lot has no qualms basking in the nastiness of its characters, and there’s no one to root for without feeling guilty. Leveraging a hopelessly broken system to prey on the elderly and rob them blind, Marla is the antithesis of a sympathetic heroine. Impeccably dressed in every scene, taking long drags from her vape pen and exhaling smoke like a dragon, Pike channels the same cold sociopathy that made her Gone Girl performance so captivating. Hot-tempered drug trafficker Roman is equally detestable, particularly when it comes to his laissez-faire attitude toward violence and torture — he describes cutting off a woman’s fingers and burying her under a Jimmy John’s as casually as one might discuss the breakfast they had that morning — and Dinklage expertly conveys the crime lord’s menace while also leaning into some borderline goofy eccentricities.

As Marla and Roman engage in an escalating game of one-upmanship, the stakes balloon to preposterous levels, and I Care a Lot comes dangerously close to unraveling completely. The resolution strains the limits of credulity, which might be a bridge too far for some viewers, and Blakeson couches the film’s final moments in a deeply cynical commentary on the structure that enables predators like Marla to thrive in broad daylight, but the execution feels a bit clumsy and too reliant on exposition. Thankfully, Pike and Dinklage are so deliciously, hilariously depraved that we’re willing to hang in there until the bitter end, largely because we hate both of them in equal measure and find a small hint of joy in watching each suffer at the hands of the other.

I Care a Lot could’ve been a film about bad people turning over a new leaf and doing something to redeem themselves, but we already know that story. Instead, it’s a film about unapologetically despicable people making choices that are increasingly immoral and outrageous, in order to stay one step ahead of someone equally vile and corrupt. That Blakeson is able to mine so much humor from this premise is a feat that deserves to be celebrated.