Movie Review: ‘The Woman in the Window’ 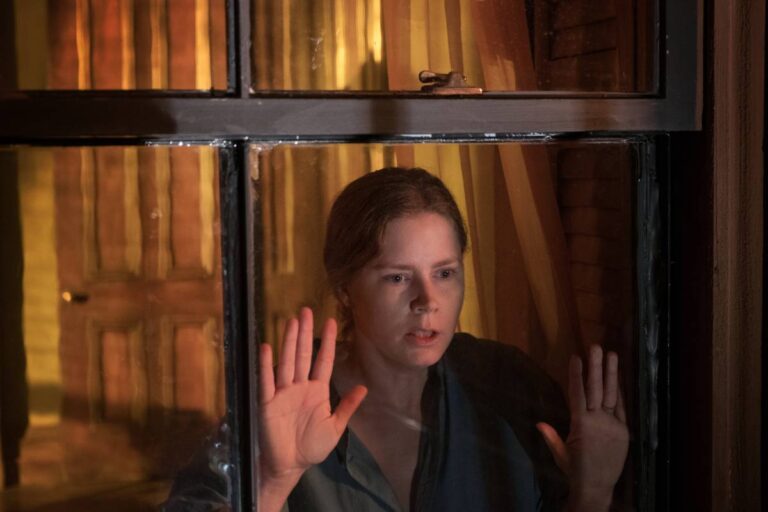 Based on a best-selling novel, directed by Joe Wright (Atonement, Darkest Hour) and boasting an A-list cast that includes Amy Adams, Gary Oldman and Julianne Moore, The Woman in The Window has all the ingredients of a compelling drama. Regrettably, this clumsy homage to Hitchcock’s classic thriller Rear Window amounts to little more than an undercooked casserole of ill-conceived ideas whose environment and atmosphere are far more interesting than any of its human characters.

Adams stars as Anna Fox, a child psychologist grappling with agoraphobia in the aftermath of a traumatic incident, the details of which won’t become clear until much later in the film. Anna hasn’t stepped out her front door in nearly a year, and spends her days gliding around her massive Harlem brownstone, washing down her prescription anxiety meds with glasses of red wine, watching old movies, and keeping an eye on the neighborhood. Her psychiatrist (Tracy Letts, who adapted the novel for the screen) is encouraged by her interest in the goings-on outside — apparently, this makes her less of a suicide risk.

Anna takes a particular interest in the newly arrived Russell family across the street, after shy teenager Ethan (Fred Hechinger) shows up on her doorstep bearing a gift. It only takes a few minutes of conversation for Anna to sense something amiss, and from her vantage point at the window, she can see Ethan’s father, Alistair (Oldman), clearly has a temper. The boy’s mother, Jane (Moore), with whom Anna spends an evening drinking wine and playing cards, is conspicuously guarded about things at home, pivoting the conversation to a different topic anytime things get too personal. Anna expresses concern about the situation in the Russell household during daily phonecalls with her estranged husband (Anthony Mackie), who advises her not to get involved.

When Anna peers across the street one evening and sees Jane covered in blood and screaming for help, she calls the police to report the assault, then rushes out the door to come to her friend’s aid. Panic sets in, and Anna passes out, awakening some time later with a pair of detectives (Brian Tyree Henry and Jeanine Serralles) looming over here. Alistair and Ethan are there, too, both claiming that Anna has never met the third member of their family — but just in case their word isn’t good enough, why not ask Jane herself? “Hello, I’m Jane Russell,” claims a woman (Jennifer Jason Leigh) Anna has never laid eyes on before. Who was the stranger she shared an evening with?

The unreliable narrator trope can be effective if handled in the right manner, but The Woman in the Window bungles this by telegraphing Anna’s fragile mental state and shaky grip on reality much too early. When it turns out she might have imagined the whole thing, we’re not the least bit surprised, and viewers who share even a passing familiarity with thrillers are unlikely to be fooled by the film’s numerous red herrings. Every performance is dialed up to eleven, save for Henry’s empathetic cop, the only person willing to treat Anna like a human being instead of “a drunken, shut-in, pill-popping cat lady.”

As we gradually learn the truth — about Anna’s affliction, the woman she spent time with and the crime she believes she witnessed — Wright pivots into full-blown slasher movie territory, with an over-the-top climax that registers as more goofy than gratifying. Had the entirety of The Woman in the Window leaned more toward camp, the final 15 minutes might have actually worked, but the self-serious nature of the film only makes the ending that much more flummoxing.