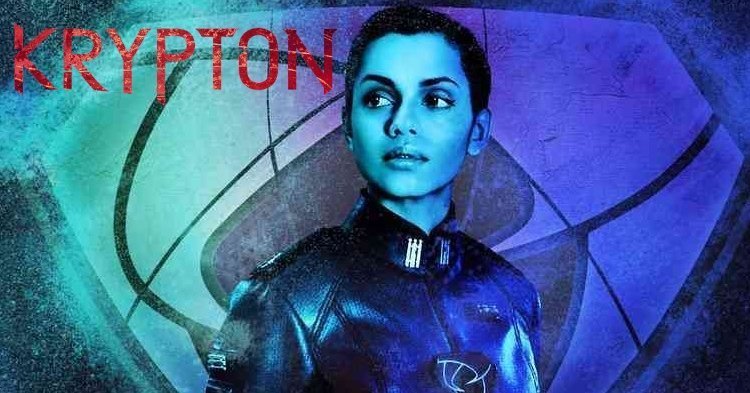 Nerd Repository joined a group of reporters to chat with the cast and creative team behind the show at this year’s WonderCon to get a deeper look into what is coming in the first season. We chatted with Georgina Campbell (Lyta Zod) as she talked about Lyta’s role this season and more.

Who is the better choice, Seg or Dev as well as what Georgina thinks it was that made Lyta get interested in Seg to begin with:

“I think they are both great! I’m not sure, actually it’s interesting over the series seeing how her relationship develops with Dev and yeah, he’s pretty hot! [laughs] Well we played around with ideas of how it happened. We never find out in the series, me and Cameron spoke about it. I kind of made up an idea that maybe she arrested him. And he was cheeky, and they kind of ended up. She probably arrested him a couple of times and then they finally released that this relationship had blossomed. So yeah probably something like that.”

Georgina on the complicated daughter-mother relationship between Lyta and Jayna:

“Their relationship is very strange. It’s a very good representation of a single-parent relationship in that it’s very intense when you got only one parent and that can go either way. I think sometimes it can mean that you are very close to that parent or it can sometimes mean that you got a lot of issues with that parent. They are the only opinion that you’re getting and in this case Jayna is very hard on Lyta. She has a very strong idea of who Lyta should be and how she should behave. Lyta doesn’t want to be that person. On top of that, Lyta also just wants the love and attention from her mother that I think every child born wants. She wants to be told that, you know, ‘I’m proud of you. I think what you are doing is fantastic.’ But her mother sees that as weak parenting, her mother is a lot more tough love. So you see that abusive relationship kind of develop over the series. You see I think you see them start to figure out as well what they’ve done to each other and how they harmed each other and also how they respect each other. But a lot of the damage that’s been done over the childhood, it is very difficult to overcome.”

What Krypton’s version of the terrorist organization Black Zero is like:

“They are like a terrorist organization basically trying to take down the system of Krypton. They want to change it because the working class are kind of being treated oppressed in different parts of the city. Black Zero have kind of risen from there and is trying to overthrow the status quo and change the politics of the city. And that’s why the military are very much involved because they are being used to stamp down Black Zero and make sure that basically these terrorist threats and actions are completely shut down.”

Whether Lyta would choose power or love:

“In a way it’s interesting she’s very similar to her mother in that they both have big ideals. And they’re both very strong and at the center of what they want. And I think also in the future, as we know of [General] Zod, Krypton is so important them. They really love Krypton and they really want to protect it and they take that very seriously. So it would be interesting, in a situation where Lyta had to choose between love and power. And being able to use power in the right way, I think that would be an interesting decision for her to have to make because I do think she takes her job very seriously and that the safety of Krypton is the top of everything.”

Given that Lyta isn’t in the comics, were there any other female characters Georgina looked at for inspiration when shaping Lyta:

“A lot of it just came from the writing. Speaking to the writers and also kind of basically doing the stunt training and doing athletic training really kind of started creating the idea of who that person was. I wouldn’t say there were any specific other performances that I looked at and was like ‘This is that person.’ But yeah actually just working with Ann was very informative because Ann’s a very, very, strong person and she’d done this sort of thing before. She was in Wonder Woman and she’d done lots of training before and she’s also just a very strong individual and she has big principles and ideas. And I kind of learn a lot from working with her.”

What Georgina’s take is on the complicated romantic relationship between Seg-El and Lyta:

“I think their relationship is very interesting. I think there is a lot of love in it. But I also think over the series, what is interesting is that you start to realize what a relationship is outside of the realm of fun. So as soon as real things start happening, that’s when you see what the relationship really is. I also think Lyta and Seg are together when there is none of that, when they are away from their work, and it’s kind of just the two of them. But as soon as all these other issues start piling in, I think you do start to kind of question this relationship. And the strength of it and how well they do really know each other because I think you realize over the series that they don’t know each other as well as they thought they did.”

What is her favorite part of the Krypton set:

“My favorite set. I really liked the gilded and I only ever actually go into it once! [laughs] But yeah I think it’s really, really beautiful. That’s like a garden that’s kind of strung up in the air. I don’t know if we’ve gotten to see it yet, but yeah it’s very beautiful. It’s where the Vexes hang out.”

What does Lyta think of Nyssa-Vex:

“The Lyta and Nyssa dynamic is very interesting. I really hope that we…it’s very difficult when there’s two women and two women in that, you know, “the other woman” type of thing, not to go down that trope of the bitch-y, ‘Oh my God, I hate her.’ We really don’t want to do that because it’s very regressive. So I think we try to balance that idea of that difficulty being there between them, but also developing a relationship whereby Nyssa-Vex is very intelligent and very smart and very strong. Even if Lyta doesn’t like her for specific reasons, I think there’s respect there. And I think that was very important that we made sure that there is that feeling that they’re both strong, intelligent women, not that kind of silly little girls.”