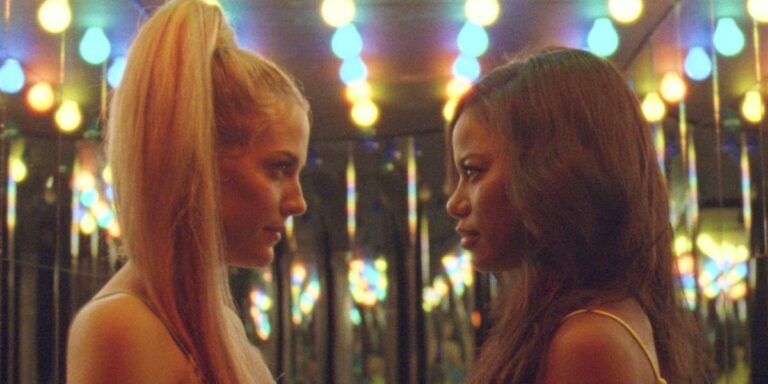 To the best of my knowledge, I’ve never seen a film based on a series of Tweets before today, but Aziah “Zola” Wells’ epic recounting of her misadventures on a cross-country road trip with an exotic dancer and her associates certainly seems like perfect fodder for a scrappy little indie. Sure enough, director Janicza Bravo turns those Tweets into a hilarious dark comedy with her Sundance 2020 feature, Zola.

“You wanna hear a story about why me & this bitch here fell out?” asks Zola (an electric Taylour Paige). The bitch in question is Stefani (Riley Keough), a new acquaintance who entices Zola to embark on a trip to Florida, promising a big payday for a few nights of dancing in a high-end club. Along for the ride are Stefani’s boyfriend, Derek (Nicholas Braun) and her mysterious and domineering roommate, X (Colman Domingo).

After leaving Derek behind in a seedy motel room, X drops the girls at the club, but despite raking in the cash, Stefani admonishes Zola not to reveal how much they’ve collected. Red flags go up when X asks if the girls want to “trap” — Zola (in voiceover to the audience) explains this is stripper lingo for prostitution — and what began as an exciting and carefree “ho trip” quickly begins to spiral out of control.

Some events from the source material have been altered, embellished or omitted, but Bravo’s screenplay (co-written with Jeremy O. Harris) plucks much of its dialogue verbatim from Wells’ original Tweets — the film even employs the social media app’s instantly recognizable sound effect whenever this occurs. The cinematography also boasts a dreamlike aesthetic, reminiscent of past A24 offerings like Spring Breakers and The Florida Project, and the performances are solid across the board, with special recognition going to Braun as the put-upon boyfriend in complete and utter denial about the strength of his relationship. Domingo also deserves credit for his ability to effortlessly shift from charming to chilling (curiously adopting a Nigerian accent in the process) and back again.

Zola suffers from some pacing issues, particularly in the second half as Bravo tries to strike a balance between the film’s shifting tones, and despite a breathtakingly tense climax, the conclusion leaves too many threads dangling to feel truly satisfying. But Zola is much more focused on the journey than the destination, and thanks to a darkly funny script and some dynamite work from the cast, it’s one hell of a crazy ride.