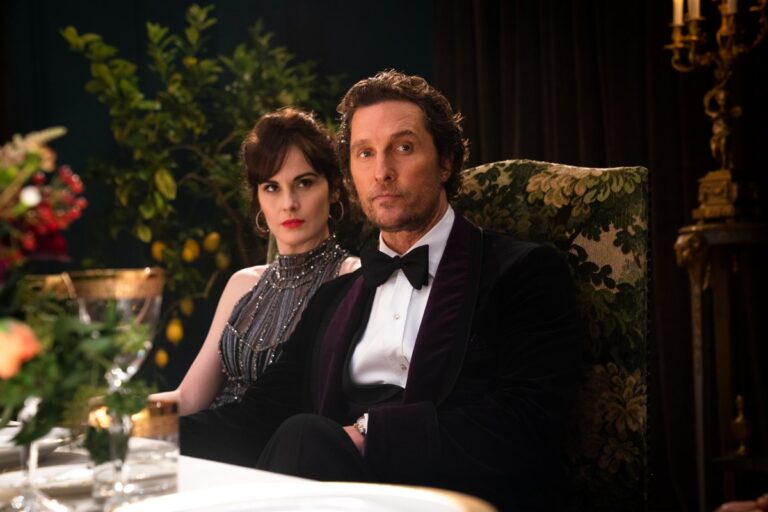 Writer-director Guy Ritchie burst onto the scene at the end of the millennium with a pair of densely-plotted gangster comedies, 1998’s Lock, Stock and Two Smoking Barrels — which kickstarted the career of action superstar Jason Statham and introduced moviegoers to the incomparable Vinnie Jones — and 2000’s Snatch, featuring one of Brad Pitt’s most memorable performances, as an Irish bareknuckle boxer with an impossibly thick accent. After a decade of helming major studio tentpoles like Sherlock Holmes, King Arthur: Legend of the Sword and last year’s live-action update of Aladdin, Ritchie is getting back to his roots with another multi-layered caper full of colorful language, The Gentlemen.

Born in the United States but educated at Oxford, Mickey (Matthew McConaughey) has amassed a sprawling marijuana empire, and is ready to rest on his laurels by selling off the business to an eager investor (Jeremy Strong). But with a vindictive newspaper editor (Eddie Marsan) nipping at his heels, a rival gangster (Henry Golding) looking make a name for himself, and a street gang raiding one of his growhouses and broadcasting it to their social media followers, Mickey’s retirement plan is in serious jeopardy — and that’s before sleazy tabloid reporter Fletcher (Hugh Grant) shows up at the home of Mickey’s top enforcer, Ray (Charlie Hunnam) with designs on blackmailing the weed mogul for a cool £20 million.

The Gentlemen might be Ritchie’s most complex and convoluted plot yet — to call it “labyrinthine” almost seems too generous, and with so many characters, rivalries, relationships and other moving pieces, keeping everything straight is an undeniably arduous task. It doesn’t help that much of the story unfolds via flashback, as Fletcher lays out, in explicit detail, exactly how much he knows about Mickey’s operation and exactly why his silence is worth such a handsome sum. Throw in a flair for the dramatic — Fletcher’s predilection for embellishment makes him something of an unreliable narrator, and necessitates a Rashomon-style revisiting of certain events — and it’s easy to lose track of what happened to whom, where it happened, and why.

But The Gentlemen weathers the storm of its ungainly narrative thanks to Ritchie’s flowery dialogue, full of bombastic speeches and quick-witted quips, and a cast that seems to revel in every hilarious and profane pronouncement. McConaughey, who thankfully makes no attempt at a British accent, may seem like an unlikely choice for Ritchie’s world, but he cuts a charismatic and sometimes menacing figure as the wily veteran. Grant’s flamboyant, booze-soaked paparazzo is perhaps the most consistent source of comedy here, and Colin Farrell’s understated role as a boxing coach with an affinity for plaid tracksuits is brilliant, but it’s Michelle Dockery’s bone-dry delivery of lines like “there’s fuckery afoot” that elicit some of the film’s biggest laughs.

The Gentlemen is cut from such particular cloth that its mainstream appeal is questionable: the average moviegoer may balk at the serpentine storytelling or the frequent usage of the “C-word,” whose utterances are so numerous that even fans of HBO’s infamously profane western Deadwood might raise an eyebrow. On the other hand, longtime fans of Ritchie’s work will rightfully hail this as a return to his roots, and will no doubt clamor for more.