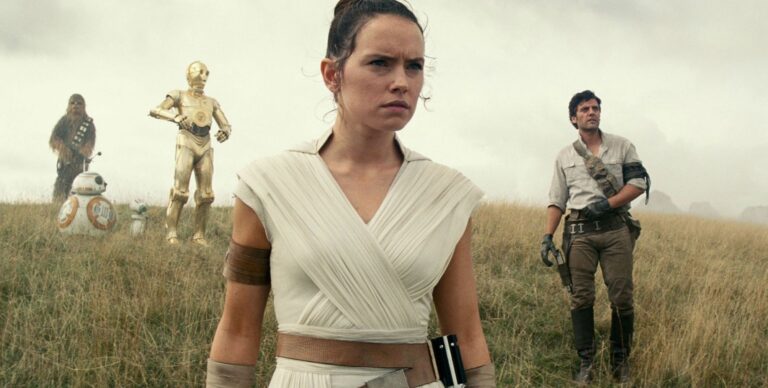 Star Wars: The Rise of Skywalker has the unenviable task of not only wrapping the tumultuous sequel trilogy, but also closing the door on the entire Skywalker saga. Director J.J. Abrams returns to end the trilogy he began with 2015’s The Force Awakens, but his return is just a little too late to fully stick the landing for the beloved space opera franchise.

The film begins with a jarring and immediate attempt at course correction from the divisive 2017’s The Last Jedi, with an opening crawl that bafflingly introduces the return of Star Wars big bad Emperor Palpatine (Ian McDiarmid) out of nowhere. From there, the story explodes forward at a breakneck pace, leaving the audience little time to wrap their brains around the heaps of exposition and retcons the script unendingly dumps on them.

While this will surely frustrate general audiences and hardcore fans alike, Abrams is a master of crafting visually stunning action and snappy Star Wars dialogue that thankfully gives the film fantastic action sequences throughout, from the cockpit of the Millennium Falcon to multiple top-tier lightsaber battles between Rey (Daisy Ridley) and Kylo Ren (Adam Driver).

Characters that seemed lost in Rian Johnson’s The Last Jedi like Poe Dameron (Oscar Isaac) not only return to form, but elevate to even greater heights. Poe is the Han Solo-type character this trilogy sorely needed, and Isaac crushes the boisterous, cocky fighter pilot into the stand-out character of the film with a satisfying arc toward becoming a true leader.

On the opposite side of the battle, Adam Driver yet again steals the show as Ben Solo/Kylo Ren with another truly great performance layered with malice and inner conflict. A scene late in the film (that won’t be spoiled here) between Driver and another actor is one of the few truly earned emotional beats overall.

Speaking of the surprising lack of expected emotion, since The Rise of Skywalker is so dense from the start with McGuffins and fan service it becomes video game-like in how it introduces numerous fetch-it missions, character cameos, and previous film callbacks. On the surface while this is still enjoyable to watch, it comes across rushed, like Abrams was cramming his ideas for a second and third film into one. Seemingly major story sections early are condensed into montage, while brief but interesting flashbacks propel the story forward, but don’t play out long enough to have real weight.

Making the film increasingly overstuffed are the introductions of even more characters to an already full roster. Abrams alum Keri Russell fares the best as the visually badass armored Zorii Bliss with ties to Poe Dameron, but Naomie Ackie’s ex-First Order trooper turned freedom warrior Jannah is forgettable and seemingly unimportant to the plot, besides being a kindred spirit to John Boyega’s Finn.

As for the awkward introduction and return of Palpatine, one would think at least the sequel trilogy finally has a real villainous threat. The answer is unfortunately a bit muddy. Nothing makes my fan heart happier than McDiarmid chewing scenery, and he does not disappoint in The Rise of Skywalker, but undoubtedly the extremely vague and thin reasons for his return and goofy Force logic behind his motivations will make even the staunchest of fanboy eyes roll. It’s hard to say whether this rather cheap grab at bringing back the character was a mistake, but the character and performance unmistakably up the fun factor.

While the film is certainly messy and manic, fans should take a breath and see it for themselves — there’ s a lot to like (and even love) in The Rise of Skywalker. Whether or not some of the story choices infuriate you, there are no long or grating sequences plaguing the film like the Canto Bight sections in The Last Jedi and the film feels like classic Star Wars, the way The Force Awakens invoked it in Abrams’ last outing. Most importantly Carrie Fisher’s farewell is seamless and lovingly handled considering the she did no filming for this before she passed.

The Rise of Skywalker is no Avengers: Endgame level of a close and yes, the Skywalker saga certainly could have received a more note-perfect way to bookend the story, but all is not lost. High expectations aside, the good news is that the film tries hard to be a crowd pleaser with a good amount of success, bringing with it an edge of your seat, rollercoaster popcorn flick set in a galaxy far, far away.

For more on Star Wars: The Rise of Skywalker, read Brent’s review here.