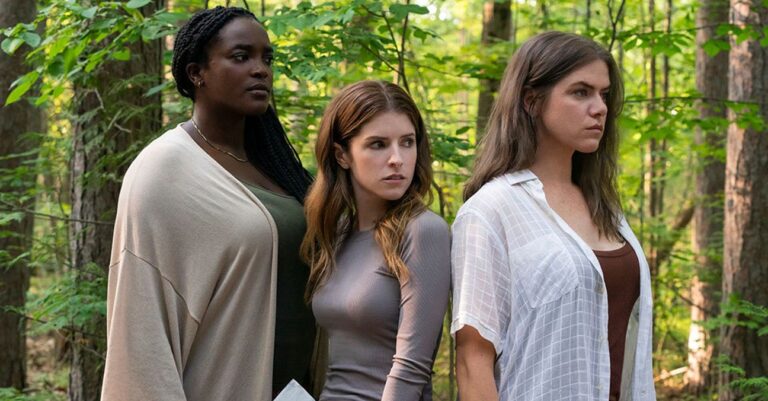 Out on the town for a long overdue reunion with her best friends, Alice (Anna Kendrick) seems happy, until Sophie (Wunmi Mosaku) and Tess (Kaniehtiio Horn) engage in some good-natured teasing about their waiter being smitten with her. “I’m with Simon,” she explains almost frightfully, as though the very notion of another man smiling in her direction is the worst possible thing that could occur. Then again, that may not be too far from the truth, judging by the number of text messages she’s received from her aforementioned paramour (Charlie Carrick) during the course of the evening, or the fact that she feels compelled to slip away into the bathroom to transmit a salacious selfie, an act clearly borne more of duty than desire.

Alice may claim to have the perfect boyfriend, but in the words of the Bard, the lady doth protest too much. After all, when planning a week-long trip to celebrate Tess’ upcoming 30th birthday, why does Alice tell Simon that she’s being tapped as a last-minute replacement for a work conference? Why does she get nervous every time her cell phone vibrates? When she loses an earring in the lake, why does she have a full blown panic attack, frantically insisting “I can’t do another thing wrong” lest Simon know how “bad” she really is? The picture perfect romance Alice has concocted is really anything but, and while Tess and Sophie can plainly see it, Alice remains in denial.

It would’ve been easy to paint Simon as a violent monster, but Alice, Darling is aiming for something more subtle and nuanced, and the effects of the psychological abuse at the film’s core are masterfully depicted in this directorial debut from Mary Nighy. There are some stumbling blocks, namely a subplot involving a missing girl that ultimately goes nowhere, and a contrived third act development that requires an almost Herculean suspension of disbelief. But Kendrick, doing some of the most interesting and compelling work of her career, manages to ground the experience even as the script threatens to carry it off the rails and into the tranquil waters of Alice’s lakeside retreat.