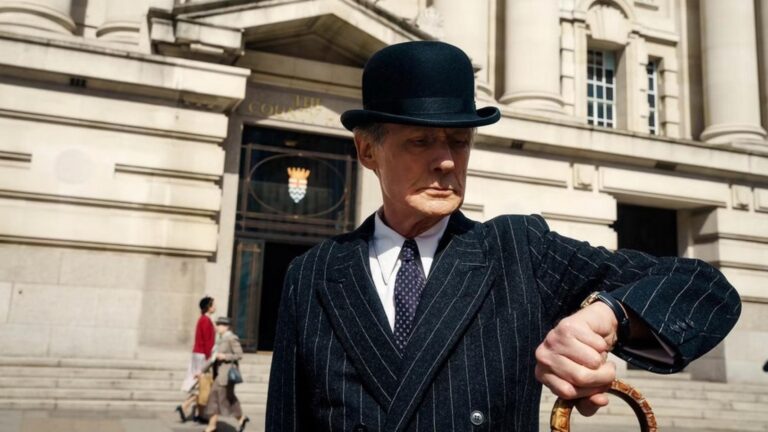 A tremendous amount of confidence is required in order to even attempt remaking one of Akira Kurosawa’s time-honored classics, but that level is confidence is evident in almost every frame of Living. Penned by revered author Kazuo Ishiguro and directed by Oliver Hermanus, this reimagining of Ikiru is set in a bustling 1950s London, where Mr. Williams (Bill Nighy, standing in for the original film’s Takashi Shimura) supervises the Public Works department at London City Council.

Having risen to a position of great respect and prestige, Williams ensures every action undertaken by his small team is completed with the utmost competence, and procedures are followed to the letter, seemingly oblivious — or perhaps ambivalent — to the bureaucratic nightmare it creates for the locals. At first, Williams seems like the sort of chap that has never missed a day of work in his life, but a mid-day doctor’s appointment and the shocking diagnosis he receives provide the impetus for Williams to reexamine his life. Has it all been wasted in the workplace, or is there still enough time left to experience joy and wonder and all those emotions robbed of him by decades of drone-like obedience?

You’d be hard-pressed to find someone that comes across more gentlemanly than Nighy, and that’s what makes his subtle, nuanced transformation so compelling. As he sheds the shackles of responsibility in favor of new adventures with a stranger (Tom Burke), Williams metaphorically rolls up his sleeves — just a tad, mind you — and bravely begins to step outside of his comfort zone; Nighy’s work in these moments is wonderfully realized. It’s an elegant performance in an equally elegant film, one that will no doubt stir up a number of emotions in viewers, regardless of their familiarity with the source material.