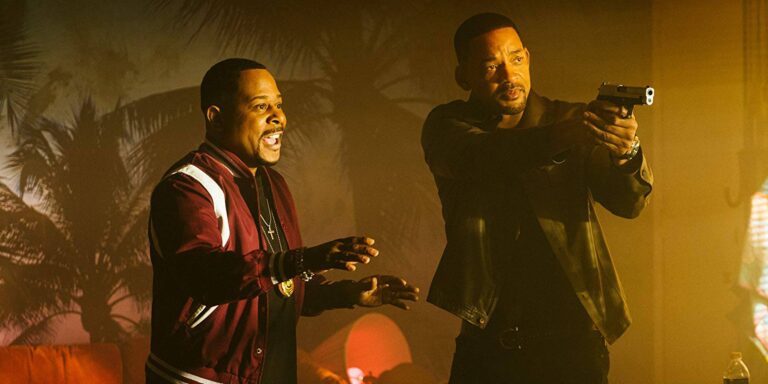 The fact that Bad Boys for Life actually made it to the big screen feels like a small miracle. The previous film, Bad Boys II, was released in 2003, and a third installment has been in various stages of development for more than a decade, with numerous screenwriters and directors coming and going throughout the process. As recently as 2017, the film had been scrapped and removed from Sony’s release schedule, but it found new life the following year and now, nearly 25 years after the original film, Bad Boys for Life has finally arrived.

The film opens with Mike (Will Smith) behind the wheel of a Porsche, zipping through the streets of Miami and admonishing Marcus (Martin Lawrence), who frets nervously in the passenger seat. A momentous life event has Marcus considering retirement, and urging Mike to do the same. “Do you want your legacy to be muscle shirts and body counts?” he asks pointedly, but Mike shrugs it off. “I’m gonna be running down criminals until I’m 100,” he boasts.

Alas, sometimes the past catches up with us, and when an assassin (Jacob Scipio) begins meticulously picking off everyone involved with a particular case, Mike finds himself squarely in the crosshairs, reluctantly being paired up with a unit of tech-savvy young cops led by an old flame (Paola Nuñez). Further plot details are best left discovered on your own, but suffice to say there are some genuinely shocking moments and well-constructed emotional beats before Bad Boys for Life careens into sheer stupidity in the final act, with a twist that would be unforgivable if not for the opportunity it affords Lawrence to deliver some of the film’s best jokes.

The original film was a near-perfect blend of action and humor, and although its sequel leaned much more heavily into the shootouts, car chases and explosions that would become hallmarks of Michael Bay’s directorial style, Bad Boys for Life tries to balance the scales by dishing out gunfights and guffaws in fairly equal measure. Much of the hilarity is derived from Marcus’s newfound pacifism, having recently made a deal with God to bring no more violence into the world — not exactly the sort of lifestyle choice suited for apprehending a 300-pound coked-up accountant, or facing off with an Uzi-toting biker gang.

Massive action setpieces are a staple of the series, and Bad Boys for Life has more than a few up its sleeve, including a wild dance club party that leads to a nighttime freeway chase with Marcus stuffed into the sidecar of a motorcycle, and an impressively staged finale in a crumbling, abandoned resort. The latter starts incredibly strong and offers the younger cast members — Vanessa Hudgens, Alexander Ludwig and Charles Melton — an opportunity to join the fray, but the sequence ultimately overplays its hand and turns into a bit of a mess.

And to be honest, that’s okay: the other Bad Boys films aren’t exactly flawless, either, but we’re willing to look past the imperfections because Smith and Lawrence have so much individual charisma, and so much chemistry together. One would think that chemistry might have diminished somewhat in the 17 years since the duo last teamed up, but if anything, it feels as though it’s gotten stronger, and it’s every bit as fun to watch these Bad Boys onscreen together in 2020 as it was when we first met them back in 1995.