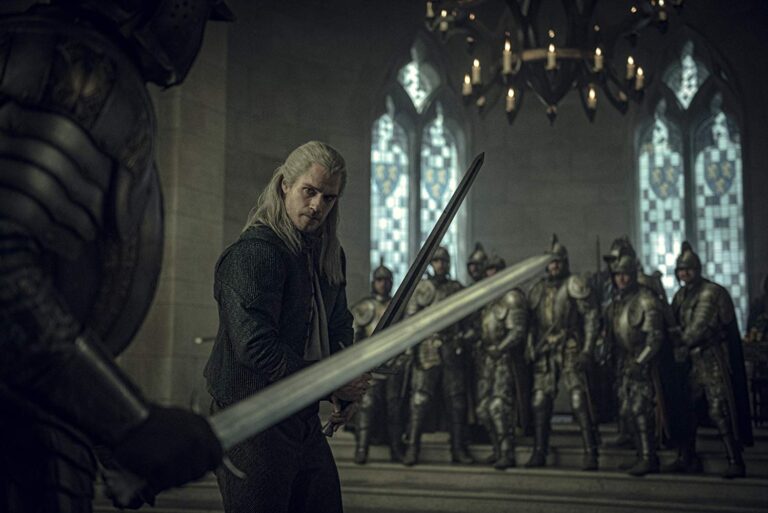 The sprawling fantasy world of The Witcher is probably best known from its critically acclaimed videogame adaptations, but Geralt of Rivia was first introduced in a series of novels and short stories from Polish author Andrzej Sapkowski. Those written works are now the basis for a Netflix series, following the exploits of Geralt (Henry Cavill) as he wanders the land as a sort of supernatural bounty hunter, slaying monsters in exchange for coin.

No doubt seeking to fill the void left by HBO’s Game of Thrones, which wrapped up its eight-season run this year, The Witcher quickly establishes its key players and the various conflicts, both political and personal, in which they find themselves entangled. When the neighboring kingdom of Nilfgaard launches an invasion into the peaceful nation of Cintra, Queen Calanthe (Jodhi May) takes to the battlefield, commanding her granddaughter Ciri (Freya Allan) to flee the castle and seek out Geralt. Meanwhile, Yennefer of Vengerberg (Anya Chalotra) trains under the tutelage of the Brotherhood of Sorcerers, cultivating her innate magical gifts with hopes of positioning herself as an influential court mage.

How these three tales ultimately intersect remains a mystery: by the midway point of the season (Netflix provided us with the first five episodes), Geralt’s adventures have taken him from the small village of Blaviken, where he makes short work of the hulking, spider-like kikimora, to the mining colony of Temeria, where youngsters are being devoured by a vengeful striga. Meanwhile, Ciri’s perilous journey through mist-shrouded swamps eventually leads to the sun-dappled clearings of Brokilon, where a race of fearsome female warriors known as dryads offer shelter from her pursuers, but she seems no closer to locating the man Queen Calanthe described as her destiny.

The Witcher introduces a multitude of characters, creatures and locations in fairly rapid succession, nearly all of them plucked neatly from Sapkowski’s pages, but viewers unfamiliar with the source material might struggle to absorb the barrage of information being thrown at them. There’s also a bit of narrative chicanery at work that will likely be the cause of much head-scratching initially, and earlier episodes may feel stronger if revisited after certain information comes to light.

Despite showrunner Lauren Hissrich’s proclaimed lack of interest in adapting material from the games, Cavill — a longtime fan of the series who lobbied hard for the title role — apparently didn’t get the memo, as his vocal performance is clearly inspired by the work of Doug Cockle, who voices Geralt in the videogame series. The low, gravelly tones are an excellent match for the character’s sardonic wit, which Cavill complements with elements of cynicism and exhaustion.

“Wizards are all the same,” he says wearily, after being subjected to several minutes of the sorcerer Stregobor (Lars Mikkelsen) trying to justify his request to have Geralt assassinate an enemy. “You talk nonsense while making wise and meaningful faces.” Later, when he’s unable to diffuse a conflict before it boils over into bloodshed, Geralt bows his head and utters a dejected “fuck” before drawing his sword — he’s clearly tired of this sort of bullshit, but he’s also given little choice in the matter. The scene that follows, in which Geralt cuts down a group of bandits in a single unbroken tracking shot, also serves as a showcase for Cavill’s insistence on performing his own stunts, and the results are impressive.

Violence and sexuality are both major components of the source material, and The Witcher certainly doesn’t skimp in either category. The aforementioned carving up of the village riffraff is gruesome, as are Geralt’s frequent encounters with all manner of sinister creatures, and there’s no shortage of bare bodies on display. A colleague described a scene in the fifth episode as “straight up Caligula,” and he’s not terribly far off the mark, but the nudity if often presented with a hint of cheekiness — no pun intended — that makes it feel ever so slightly less gratuitous.

If there’s one major criticism to levy against The Witcher, it’s that it can’t quite seem to settle on a consistent tone. The series attempts to balance the grim subject matter with the introduction of philandering bard Jaskier (Joey Batey), but the character quickly travels well past the point of comic relief and dangerously close to farcical territory. His incessant attempts at humor feel forced, and the jokes, such as they are, fall flat more often than not. Pacing is another key issue, with some episodes sidelining the monster-hunting in favor of exposition dumps and table-setting for future plot developments.

Overall, The Witcher comes through as a faithful rendition of the novels, with an intriguing mystery at its core, enough recognizable elements to please fans of the game series, and an intensely charismatic performance from Cavill that helps carry the series through its low points. Hopefully Hissrich and her team manage to find stronger footing in the final stretch of episodes and build a solid foundation for the already-announced sophomore season.