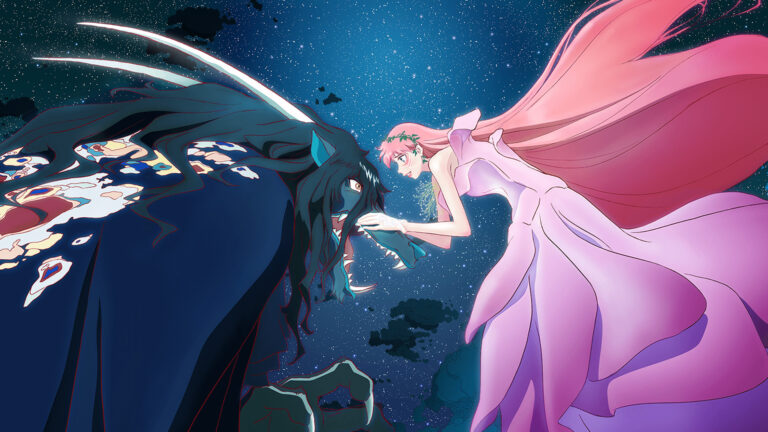 Belle, the latest offering from Japanese director Mamoru Hosoda, posits a world where a social media platform known as “U” has become the preferred choice of escapism for anyone hoping to slip the bonds of everyday life and its humdrum trappings. Utilizing a revolutionary “body sharing technology” that constructs online avatars reflecting each user’s innermost feelings and desires, the world of U is populated by billions of users across the globe, and nearly all of them are enamored with the arrival of pink-haired J-Pop superstar Belle.

While the subject of Belle’s offline identity becomes the topic du jour for her rapidly expanding fanbase, her real-life counterpart — shy, anxiety-ridden 17-year-old Suzu (voiced by Kaho Nakamura) — grows increasingly uncomfortable with the amount of attention garnered by her avatar. At first, the inherent anonymity of Suzu’s online persona serves as a means of expressing her pent-up grief at the loss of her mother several years prior, while shielding herself from the vulnerability of acknowledging and expressing those emotions. But a chance encounter with the platform’s de facto villain — a grotesque and violent creature named Dragon (Takeru Satoh) but more often referred to as “The Beast” — thrusts Belle even further into the spotlight, putting her in the crosshairs of U’s digital peacekeepers, whose solution for dealing with troublemakers is to “unveil their origin” (the equivalent of doxxing).

Suzu may be desperate to remain anonymous, but she suspects lives may hang in the balance if she’s unable to piece together the identity of The Beast, and the film’s latter half becomes a race against time as Suzu straddles both the real world and the digital landscape of U to solve the mystery. A host of supporting characters rally around Suzu’s quest, including longtime pal Hiroka (Rina Izuta), popular classmate Ruka (Tina Tamashiro), and Suzu’s childhood friend and secret crush, Shinobu (Ryô Narita), each of whom might be harboring their own secrets.

Admittedly, there are some familiar elements at play here, and few viewers will be surprised when Belle recognizes The Beast as more misunderstood than monstrous. The film doesn’t shy away from wearing its influences on its sleeve — there’s even a touching homage to the ballroom dance from Disney’s 1991 animated classic — but Belle jettisons the notion of romance between U’s most-watched users in favor of something far more profound. The revelation behind the monster’s fearsome online identity is shocking and heartbreaking, and the subsequent events are destined to reduce many viewers to tears. Likewise, the film’s sincere examination of grief, loss and recovery is deeply affecting, and Hosoda harnesses the unique power of the medium to elicit emotions in a way that few filmmakers can. In short, Belle is an incredible experience and a remarkable achievement in animation.