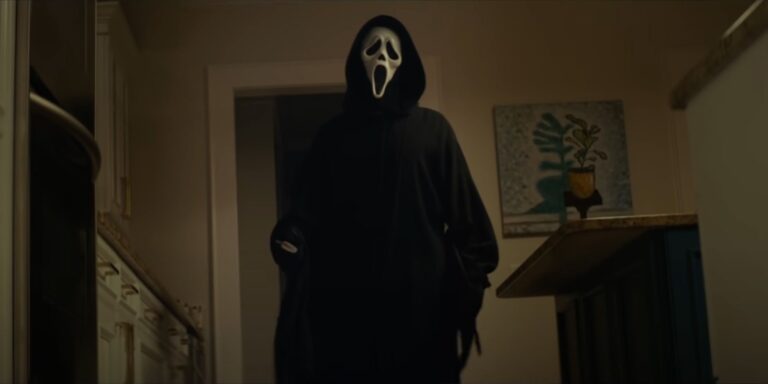 Reboots, sequels and ‘requels’, as Scream (2022) dubs them, are certainly commonplace in Hollywood these days and the meta-horror franchise is back to tell you all about it. The Scream series’ trinity of surviving heroes all reprise their roles in this entertaining, but uninspired skewering of movie franchises returning to their roots for new life.

Eleven years since the events of Scre4m, this film sees yet another Ghostface copycat killer return to stalk the youth of Woodsboro. In an intentional throwback to the shocking Drew Barrymore opening scene of the original Scream, a young teen girl (Jenna Ortega) is home alone when she gets a call from a creepy voice with a love for slasher movie trivia. The scene plays out with some clever modern technology twists, but the bigger shocker is that the girl survives the attack. Now that she can tell the town that Ghostface is back, events are set in motion that see the return of her older sister Sam (Melissa Barrera) bringing with her the ghosts of the past.

Scream (2022) takes its time getting to know new cast members before re-introducing the aforementioned trinity. The Boys alum Jack Quaid is the standout new character Richie who speaks for the audience by recognizing how ridiculous it is to return to Woodsboro with his girlfriend Sam. Her backstory soon comes into play in an interesting (if not timeline confusing) twist that connects her to the original cast. Unfortunately, the film doesn’t go far enough with the idea to make it truly interesting, instead plays on the nostalgia factor that results from the head scratching twist.

Deputy Judy (Marley Shelton) from Scre4m is the only other returning character and is now the Sheriff of Woodsboro with a teenage son (Dylan Minnette). They have an endearing relationship and Judy is still one of the easiest characters to root for in the franchise – and that’s saying a lot considering most characters rarely make it past one film.

As for those other returning stars, David Arquette’s Dewey is once again the MVP of the main characters from the original film. Dewey also finds himself yet again split from Gale (Courteney Cox) and spends his days in his trailer watching her as anchor on a Good Morning America type morning show. As the only remaining survivor of the multiple Woodsboro massacres to remain in town, Sam seeks his help to track down the killer/killers. Arquette shines as a jaded but protective mentor, once again throwing himself in harm’s way to protect both his old and new friends.

Campbell’s return as Sidney Prescott somehow carries the most weight, even though we learn very little about her current life other than having kids and she got the hell out of Woodsboro. The actress seemed the most relaxed that she’s ever been in the role and clearly having a bit of fun. Cox’s return as Gayle is probably the biggest waste, but at no fault to the actress. The story didn’t seem to know what to do with Gayle and continually sidelines her until she can pop up with a quip or random nostalgia moment.

The sole reason for this movie to exist is to capitalize on the requel trend, but to the franchise’s own detriment, they already covered a lot of this ground in Scre4m. Instead, this time they focus completely on calling back to the first film in meta joke rambles that become like anvils to the head by the film’s end. Act 3 is also where the film finally loses most of its coherency as it races towards a sloppily handled killer/killers reveal that has little impact on the story while not being particularly original or unexpected – just more reverence for the first Scream film.

Scream (2022) is most certainly flawed, but surprisingly it’s still enjoyable for anyone that carries an affinity for that original film. The kills are nerve-wrecking and occasionally clever, alongside some legitimately funny moments from the entertaining cast. The more one pulls back the layers of Scream (2022) the more the whole thing crumbles, but with expectations tempered there’s still a good time to be had in here for true Scream fans.